I wanted to write a blog about my friend Shazza.

She passed away in January after having been diagnosed with pancreatic cancer at the end of last year.

When I jokingly said ‘Merry Christmas and a happy new year! See you in 2014’ to Sharon as she walked out of the unicorn pub back at the beginning of September 2013; I had no idea I would be saying goodbye to her forever in this world and that seeing her in 2014 would never come to being.

To say that Sharon’s death came as a shock is an understatement. I think the whole village, her family and beyond is rocked by the sudden tragic loss of our dear friend.

Being away from home and receiving such news is very surreal. In essence I suppose I still don’t really believe it has happened. Perhaps it will hit me more powerfully once I return home. Maybe when I’m sat outside the back of the pub with no Shazza with glass of wine in her hand and her infectious laughing over something we both find hilarious.

I cannot imagine what her family and particularly Kerry (Sharon’s husband) must have gone through and be going through. I send my love and hugs to him.

I feel the fragility of a single life, my own, an awful lot whilst travelling. The lack of ‘the everyday’ routines and people and occurrences bring my being into a much more poignant light. You can’t really escape from yourself when you travel. You have to face yourself and your fears and past experiences every day. You have a lot of time to ponder over situations and plans and visions. In my mind I feel like life at home is practically put on hold whilst I make my way around the world. Not just my life, but everyone’s. Truth is, so much has happened whilst I’ve been away that contradicts this:

6 new babies, 4 engagements, 1 break up, 2 weddings, 1 best friend moving to India for 2 years, another best friend to New York indefinitely. Ovarian Cancer diagnosis to essentially my second mum. And of course the passing away of Shazza.

It’s a difficult decision not to just pack up and go home.

But I haven’t. I remember having a conversation with Shazza about my travels. She was excited for me and at the time we had been talking about whether I would be back in time for the panto of which she was writing for this year. I said I didn’t really know as yet whether I would be back in time to even see it. As it happens it is currently just finished! I hope someone filmed it 🙂

We performed together in the cublington panto two years in a row. Last year Shazza played a ‘shrek’ character. It was jack and the baked bean stalk. I was jack, she was the ‘big’ green giant.

It seems absolutely crazy that it was a year ago that we did that panto and in less than a year Shazza is gone. So epically unfair and yet the glimmer of light is that she is no longer suffering.

I have entered into the MK half marathon. I don’t generally do much excercise. Certainly I have not run for a long while. But I am doing this half marathon on the 5th may. Exactly a month after I return home. I will be running to raise money for Cancer research UK. And in memory of my lovely friend Shazza; of whom I will never forget.

Please dig deep and donate money to this worthy cause. Let’s hope and pray that one day this life destroying disease called cancer will have its butt kicked off this earth. I believe it can be done. #jogoncancer 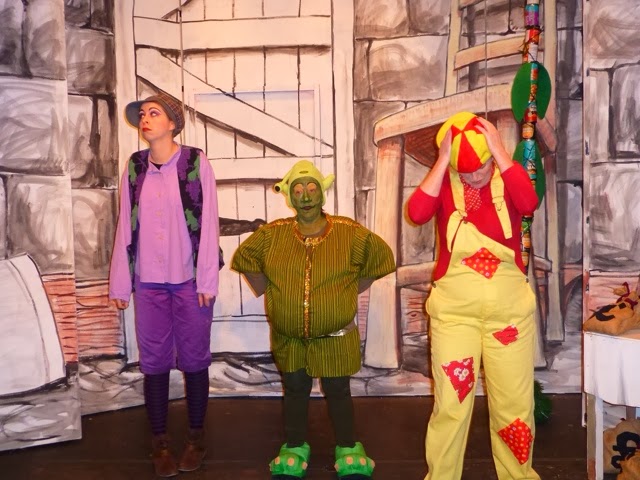