(Apologies for the cliche blog title)

Before departing on our overnight cruise through doubtful sound we went on a trip in Te Anau to visit the glow worm caves.

A beautiful morning we took the half hour boat across to a secluded and quiet part of the lake with a jetty just sticking out ready for us. Here a guide divided us into groups of about 12 and we had a safety briefing before entering the caves.

Millions of years old, and because they were glow worms, we were unable to take photographs. Mainly because of the flash. The experience was great. Ducking into the entrance of the cave and through a tunnel; it took my eyes about 10 minutes to adjust to the complete pitchblack darkness. Prior to this I was just ducking the whole time and placing my feet very carefully. Must have looked stupid to anyone that had night vision. There wasn’t much to duck for after the initial ducking!!

We walked through caves and passageways with the sound of rushing water around us in this mystical and underground world; until we reached an underground stream with roaring waterfall. Here we hopped into a boat and in pitch darkness and complete silence we were taken around the caves covered in glow worms. It was pretty amazing. The silence in particular made the whole experience. Staring up into the caves, glow worms upon glow worms sparkled and shine their light. All I could hear was water and all I could see was the twinkling star light appearance of the glow worms. It was truly magical.

Leaving the peaceful town of Te Anau, we took a bus to the edge of lake manapouri. Here we departed on yet another lake crossing, it was the only way to get to a off track road that led us over a pass to doubtful sound.

The weather couldn’t have been more different from that of our day at Milford sound. Blue skies, turquoise to dark blue waters and vivid green mountains with crystal pale blue and white waterfalls.

A bus took us over the pass and down to doubtful sound. A pretty sketchy road with very steep places and not much margin for error. But every now and then breaks in the temperate rainforest (that made up our surroundings) to peek at closer glimpses of the sound. 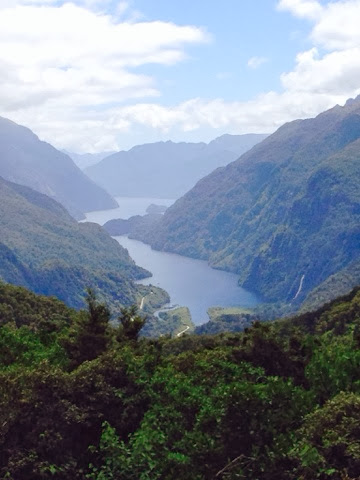 In the photograph above you can see near the water the road our bus took us on. At the bottom was a jetty with our boat ‘the navigator’ waiting for our arrival.

With the other 53 passengers we embarked onto our floating bed for the night. It was however only lunch time. So once we had set sail we took to the upper deck to hear the commentary and listen to the nature expert explain our surroundings and it’s history.

Throughout Fiordland the fiords are officially mapped as sounds.  Strictly speaking, they should be called fiords. A fiord is a glaciated valley – typically narrow and steep-sided – that has been flooded by the sea after the glacier’s retreat.  A sound, on the other hand, is a river valley flooded by the sea following a rise in sea levels or depression of the land, or a combination of both.

There you go, an interesting fact! Seemingly they couldn’t be bothered to re-map fjordlands to say fjords, so they all remain known as sounds!

We were the only ones on the sound. It was stunning. We stopped off to kayak, and after cruising around various ‘arms’ of the sound we found an arm to anchor in for the night. 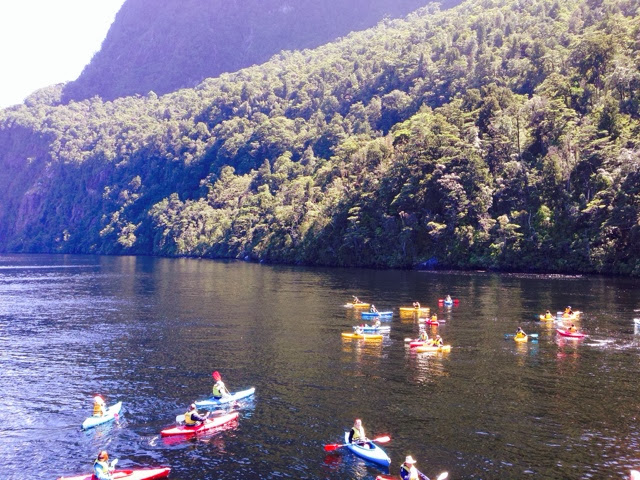 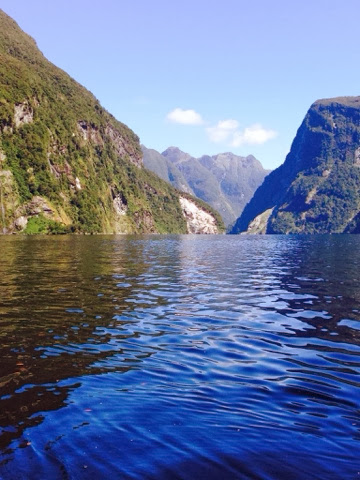 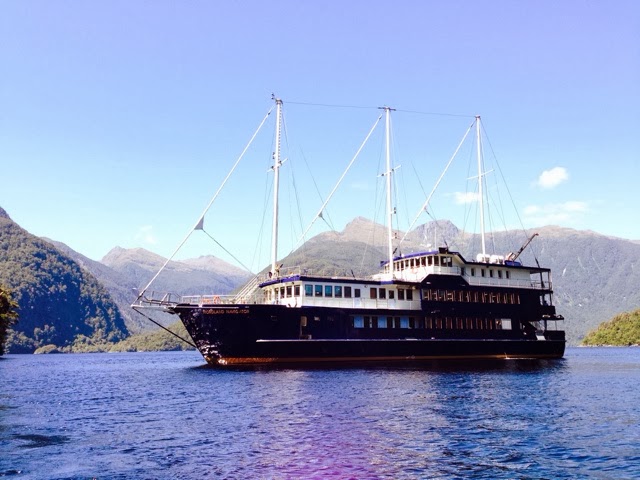 Onboard we met a fascinating family who  I very quickly loved! A father, mother and daughter. The daughter had been involved in a very bad car accident almost two years ago and had been in a coma and at 19 years old had to learn how to walk, read and write all over again. A tribute to her incredible parents who had been through hell and back. Krista, the daughter is a lovely and beautiful girl with an incredible family around her. We had dinner together and shared all sorts of stories and continued to hang out the following day. 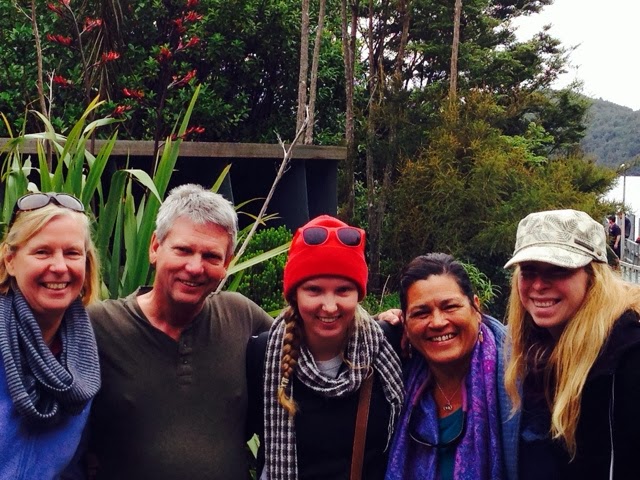 In the morning the boat left early from where it was anchored. After an early cooked breakfast Onboard the boat took us out to the entrance of the sound from the tasman sea. Here we saw seals on the rocks and experienced the sheer power of the sea that is known as being particularly turbulent. 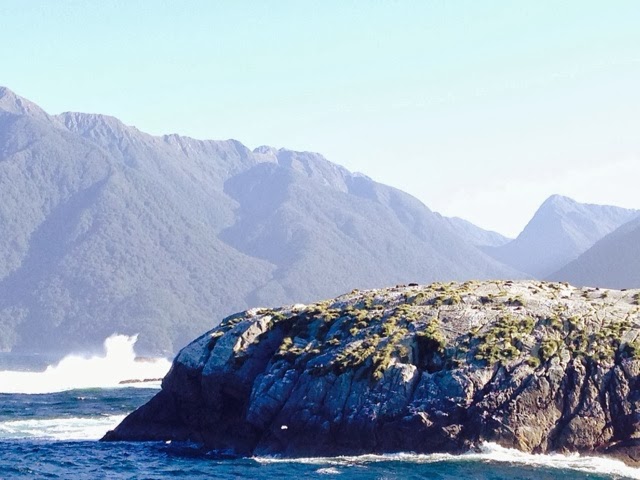 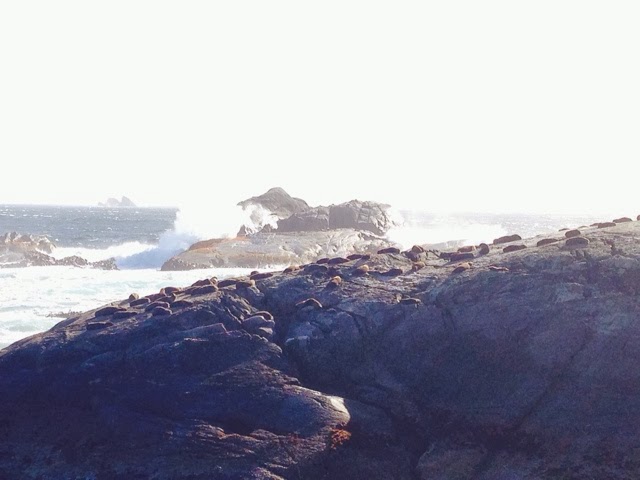 With albatross following us back into the sound we headed back towards where we had embarked. Stopping off at various places learning about the wildlife. We drank water that was pouring off a cliff edge. The moss covering the mountains is what enables the trees to grow right the way down to the sound waters. It is also the most absorbent thing in this planet that as yet humans have been unable to create anything that betters it’s absorbency. The moss also acts as a filter and as the water runs down and eventually into the glasses we were holding; we ended up drinking the purest water I ever tasted! Fresh from the source. 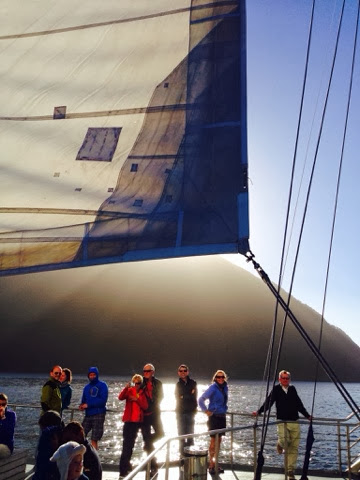 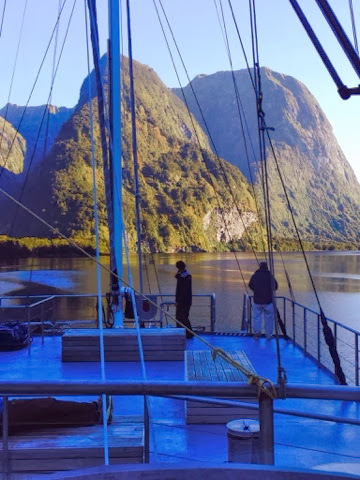 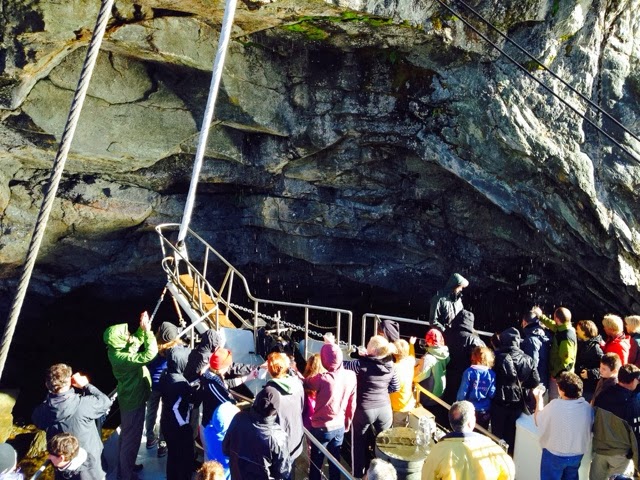 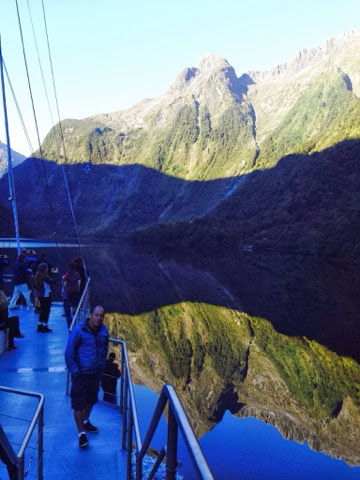 The final thing we did before heading to the start was to stop in an inlet/arm of the sound and switch off all the engines of the boat. The captain and commentator asked us to be silent as long as we could. Well it was a good 20 minutes of complete silence and completely stillness and aloneness in the vast beauty of the sound. It was breathtaking and an amazing experience.

We really don’t take enough time to stop, be still and listen or close our eyes and clear thoughts from our mind. That 20 minutes of reflection in complete silence were so far the favourite of my trip to New Zealand.