Traditionally, the cook islands celebrate the 1st birthday of a child’s life, just like we do, but it perhaps has more significance in their culture and therefore was promising to be quite the affair! I had been told that up to 80 people could be coming!! Dickie certainly was preparing food for the masses when I awoke that Saturday morning.

He was making a potato dish called ‘minus’ This is basically potato, beetroot, mayonnaise and what I would call piccalilli with egg shavings on top. It’s like a potato salad. 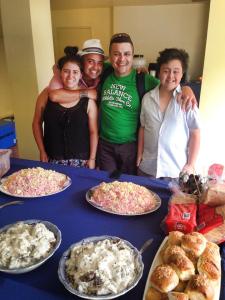 Then there was a dessert he had prepared called ‘poke’ (pronounced ‘po’ as in pork and ‘ke’ as in keg) This required bananas, a lot of them! To be stewed overnight in a huge pan with a small part of water. The bananas turn a browny red colour. In the morning he transferred this banana into baking trays and places in the oven. What comes out it this dessert that has the texture of Turkish delight but tastes of beautifully rich banana. It is served with thickened coconut milk with cream. I’ve never had anything quite like it before but it is delicious and deceptively filling!!

Ava’s birthday was a complete mixture of cultures. Cook Islands, NZ mauri, Samoans, kiwis originating from Europe a long while back and me, a Brit!! One thing I was not aware of prior to my visit to New Zealand was that the mauris in the country, although derived from the same area of the world, are not the same as Cook Island mauri. Just like Europeans who left for Australia and New Zealand, there are some similarities in cultural and significant traditions, but inevitably there are huge differences that have evolved over the years. Considering the mauris have only been in New Zealand for 800 years max and the cook island mauris go back several thousand years, you can therefore see my point.

New Zealand is the first place I’ve ever visited where although two completely different cultures have collided some 300 years ago when the first settlers from Europe arrived onto mauri land; the two cultures have each adapted each other’s cultures in some sort of unspoken compromise.

I read an article that some European settlers landed on Stewart Island, down in the south island, and were shocked to discover mauri women with children out of wedlock. Quickly exclaiming the sin of what they had done the settling priest managed to marry some 8 mauri couples within 2 days of arriving on the lands!! Pretty fascinating.

Obviously with any country that shares a multitude of culture and ethnicity there are issues and clashes. But it’s just not so prominent here. There is a real acceptance of one another. ‘Kia Ora’ meaning ‘welcome’ is what greets you at Auckland airport with mauri woodcarvings. The Auckland museum is proud of mauri history and indeed most Polynesian history.

Anyway, I digress… Ava’s father is mauri and so there were a lot of mauri present!! Then her mum, dickies niece is half cook islander and half kiwi settler. So there was a strong cook island representative. Some friends from Samoa and indeed a great aunt who is actually considered royalty from a small cook island that Dickie originates from.

There was lots of food including a huge hog roast, all of dickies cooking and other BBQ’d meats. A bouncy castle/water slide, an ice cream truck turned up and their were 3 birthday cakes! Ava looked very pretty and in general for me it wasn’t too dissimilar to a huge family gathering we may have at home in the UK.

On the Sunday we went to a cook island mass. 2 priests were over from the Cook Islands and therefore it was pretty special and a lot of cook islanders living in Auckland were in attendance. The whole service was spoken in the cook island language. It was quite beautiful, and although I didn’t understand any of the service it was really quite an awesome experience. The songs, with no musical accompaniment were absolutely stunning. That same raw sound, various harmonies, parts for just the men, parts for just the women. Everyone was dressed up. Women had traditional fans to keep themselves cool. After the service we went back to the house to have a Sunday lunch. This mainly involved a lot of leftovers from yesterday but it was great to have all dickies family there and continue to meet them all.

I really love the cook island culture. Everyone is family. Everyone seems to be your aunts regardless of the fact they could be your cousin. It’s an all inclusive, loving and friendly environment. I must try and get to the Cook Islands one day. I know I would love it.

This brings to an end my time with Dickie. Tomorrow morning I am off to wellington, stopping there on my way to the South Island to meet my mum and auntie Claire.