So after alpha 1 we headed out to alpha 3. Alpha 3 is based at Imbak canyon. We firstly had to drive to Telupid. This is about a four hour drive through the mountains, up and down, getting stuck behind huge lorries…it’s pretty tiring. Then after a stop in Telupid for lunch we headed into Palm oil plantation Central and towards Imbak. Imbak is surrounded by Palm oil and logging roads. So although it wasn’t extreme off roading it was still pretty hairy at times. Especially towards the end. Nat (logistics nat) is spending the last part of the phase with alpha three and so she was accompanying us in the land rover. I drove into Imbak, and as I hadn’t had the chance as yet to do any extreme off roading I was both apprehensive and excited. The roads were pretty slippy at times due to the rainfall of the last few days. As we got closer the roads deteriated somewhat. We were now off the logging roads and on a one way dead ended road into the heart of the jungle and Imbak canyon. Although the roads weren’t as ridiculously hard to navigate like the roads to alpha 2 were; for me it was still a challenge and certainly towards the end where in particular one part of the road had basically disappeared, I found it hard but had a massive sense of achievement on completion. 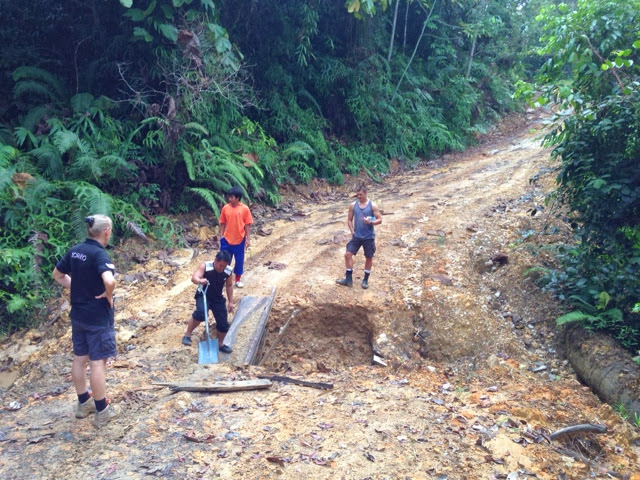 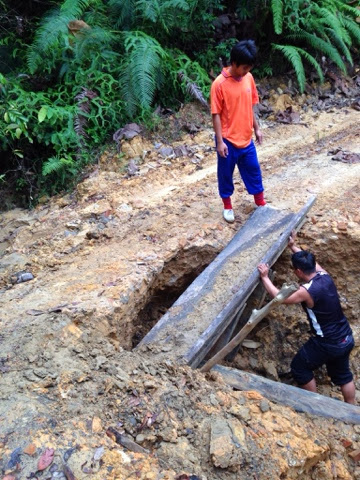 We arrived at Imbak at about 4.45pm to waving and greetings from Jen and Angela (two of the project managers as well as Ali who was doing the radio at the time) who had just returned from the waterfalls having had a swim. Obviously we wanted time to swim in the falls and so after a brief catch up and having been shown where we were to sleep for the night we got changed and wandered down to the falls. Probably worth noting that the car was just stopped in the road! No where to pull over, and Jen told us that no one ever goes down the road or past them. In fairness it’s basically the end of the road as it’s only a couple of hundred metres to the falls themselves.

Anywhere else in the world these falls would have been made into a real tourist attraction. It is truly beautiful and the walk down to them was like a real adventure. It almost felt like we had just stumbled upon the falls as if were the first human beings to have done at one point. And if it wasn’t for the sign saying ‘Imbak falls’ it would have felt even more as such! 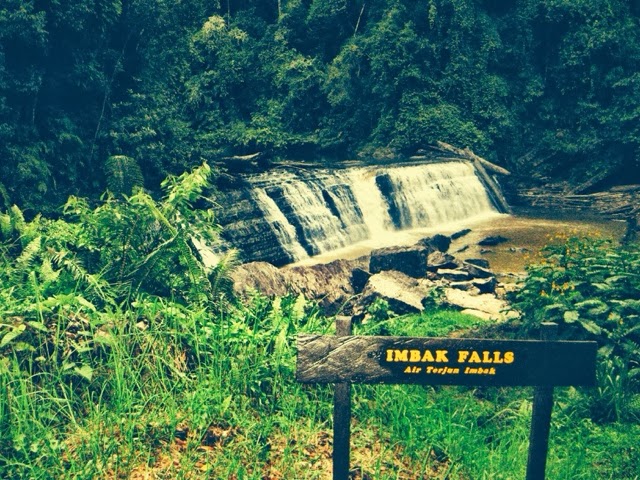 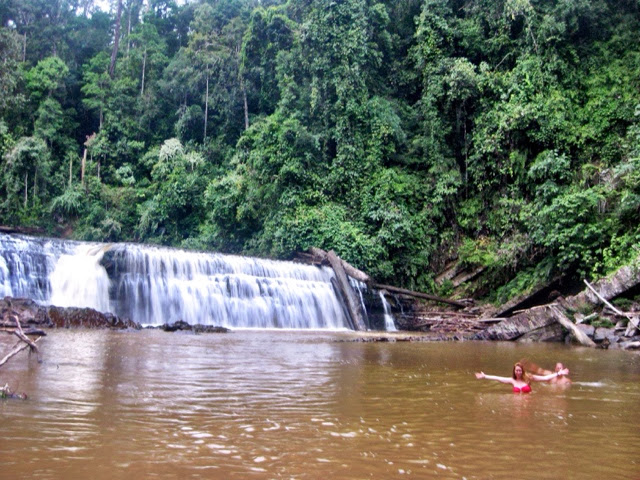 Just around the corner from the campsite there is the rangers camp. The rangers are there to help raleigh with the building of the bridge. Basically they need better access to the other side of the river for research purposes and Raleigh’s mission is to construct a suspension bridge over the course of the expedition.

Alpha 3 had also forgotten or not thought that there was still a loop competition. However they still did some good food. Chilli nuts to start, sweet and sour chicken with rice and finally donuts. We talked by firelight late into the evening and it was great being under the canopy of the jungle with all the jungle noises all around.

Every time the loop visits a project site we also bring the shop which is basically re supplies of various medical bits and bobs, toiletries and finally snacks and chocolates etc. this time we did it in the back of the land rover as it had gotten dark. Kris Linda and I had made up a rap to perform to the venturers. I guess as some kind of jungle sales tactic. Lol. The rap goes as follows:

Have some mentos, minty fresh

Creamos with your cup of tea

Mr potatoes just for you

Cadburys or a ciggy stick

Antiseptic for your scabby bits

After dinner I disappeared off to the loo. Not as nasty as a long drop can be. But a small but only 3 sided structure with a squat basin/toilet in it. Inside the toilet were probably about 15 HUGE ants. Atleast 1 and a half inches long. If that wasn’t enough when actually going to the toilet there were two MASSIVE spiders on the inside on the walls. It was indeed a ‘welcome to the jungle’ moment.

We had to leave at 5am the following morning and so I was keen to get to sleep. However the jungle had other plans. Termites had literally taken over one of the static bashas. You couldn’t even see a centimeter of wood for all the termites. Fortunately it wasn’t the basha I was in but the venturers one. At least 4 people’s belongings were covered in them. Then ensued a mass clear up mission including sweeping them off, laying out salt and Vaseline to prevent them from getting any further along the basha and also using deep spray. This attracted even bigger ants than the ones in the toilet. The dramas of the night left me actually going to sleep well after midnight. And even then I found it hard as I’m not used to the jungle!! 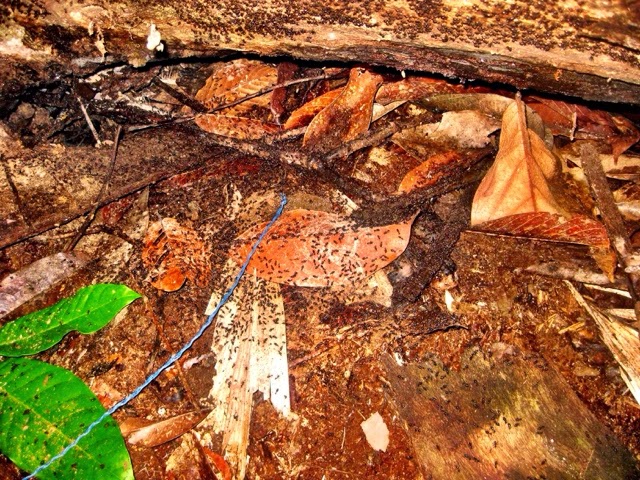 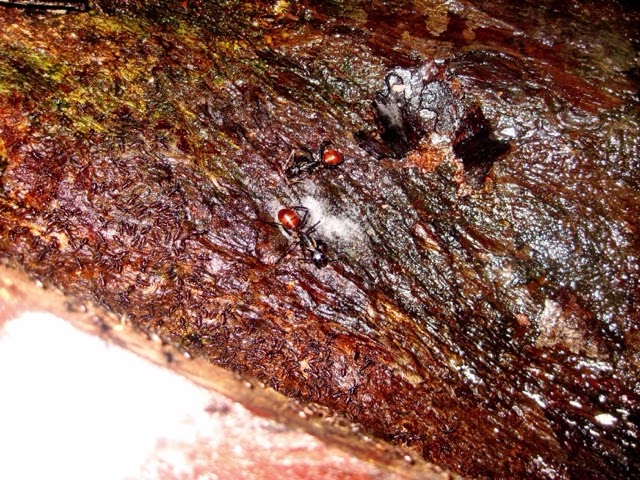 At around 4.30 am I awoke quite suddenly as I felt something moving under my head. I couldn’t find my torch, so using my phone I scanned the pillow area part of my sleeping bag and nothing was there. So I settled back down again. A minute later something crawled near my ear and then onto one of my fingers where it then began squirming around like a worm on ridiculous amounts of caffeine. It felt relatively big and I tried to flick it off without success. I then realised that by flicking it off I would just be making it land somewhere else within my own little mosquito netted cocoon. So pulling up my mosquito net I shoved my hand outside and vigorously tried to shake this thing off!! At this point I realised it was a leech. Simply because of its incredible grip. In a ridiculous-o-clock stupor I remembered that the trick is to rub and flick. So thats what I did. I reckon it took about two minutes. Despite how small these things are in comparison to, well…. Me. I was still absolutely shaken up! I scrambled for my head torch to do a check of my finger to see if the leech had actually leeched. But it hadn’t! No blood in site!! Mwahaha! Take that leech!! Anyway after scanning my area to see if there were anymore I tried my hardest to get back to sleep. Unfortunately I was now far too alert for even the slightest movements and therefore just lay on my back staring into the jungle and counting down the minutes till I could actually get up. I could see monkeys swinging in the trees and making a ridiculous noise as the suns light started to make the canopy a little lighter. I guess despite the pretty silly amount of sleep I got and the insect/creature dramas, I can still say it was a pretty awesome experience, and despite this I could almost definitely have stayed longer!!! 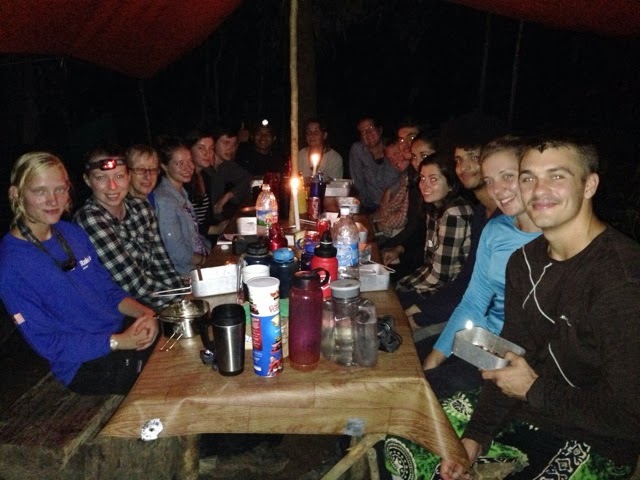 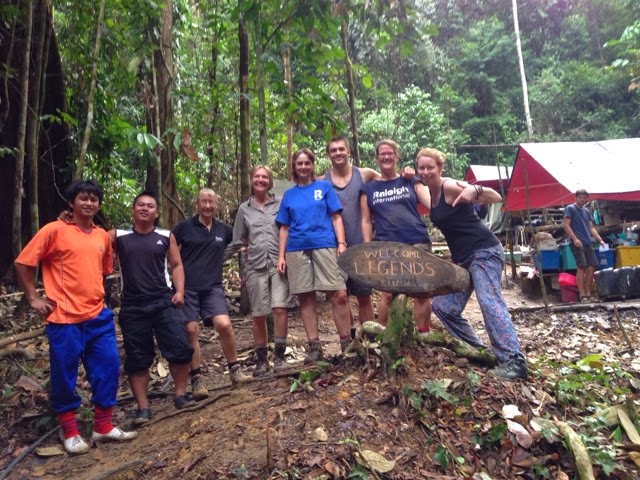