“Eradicating extreme poverty continues to be one of the main challenges of our time, and is a major concern of the international community. Ending this scourge will require the combined efforts of all, governments, civil society organizations and the private sector, in the context of a stronger and more effective global partnership for development. The Millennium Development Goals set time bound targets, by which progress in reducing income poverty, hunger, disease, lack of adequate shelter and exclusion — while promoting gender equality, health, education and environmental sustainability — can be measured. They also embody basic human rights — the rights of each person on the planet to health, education, shelter and security. The Goals are ambitious but feasible and, together with the comprehensive United Nations development agenda, set the course for the world’s efforts to alleviate extreme poverty by 2015. “

So a week or so ago I had the opportunity and privilege to accompany Zed (Raleigh future strategist) to Kota Marudu in the north of Sabah for meetings with AFC (Asian forestry commission). AFC is our project partner for work in villages in the mountainous rainforest nearby Kota Marudu itself, where we have constructed approximately 16 gravity water feed systems so far; providing fresh water to villages who had perhaps previously had to walk miles for water. There are around 50 odd villages so still plenty more work to go. The idea of our visit was to establish how to move forward working with the partners keeping in mind the UN millennium goals that Raleigh adhere to. Below are the millennium goals.

The eight Millennium Development Goals (MDGs) – which range from halving extreme poverty to halting the spread of HIV/AIDS and providing universal primary education, all by the target date of 2015 – form a blueprint agreed to by all the world’s countries and all the world’s leading development institutions. They have galvanized unprecedented efforts to meet the needs of the world’s poorest.

Out here in Borneo Malaysia Raleigh’s key millennium goals are 1,2, 7 and 8.

One of the most prominent topics of our meeting seemed to be on how to sustain the relationship between the villages in which Raleigh enter and do the work after we have gone. Not only the relationship but also the maintenance of the gravity feed water systems themselves and the knowledge that the community learning projects continue to be able to support their community of adults and children alike.

There seems to be an attitude from a small minority of the local villagers that Raleigh arrive, do work and leave. Which is essentially what we do, in black and white. However it is or should be much deeper than that. The villagers need to invest and be involved in what Raleigh do from the beginning, not only to grasp a sense of achievement once a project is completed but also to then be able to maintain the project going forward. In most scenarios this is of course the case, but there are always things that can be improved.

AFC themselves have their own strategies. One of which is to start constructing solar panels in villages so that they can have their own electricity. Sanitation is also massively on Raleigh’s agenda for the future. Clean water as well as access to water. The meeting was really interesting and fascinating for me to learn more about Raleigh strategy. To be honest I felt like I wanted to get involved more. Even started to contribute to the conversations themselves and suggest things. I don’t know. I was really inspired by the meeting.

Because my future goal is to set up my own charity, this was overall a fantastic insight into the more strategic side of Raleigh international and the ways in which you can work with partners and sponsorship in order to achieve targets/goals.

We visited Kampung Sugondon Mugunadai which is a previous project site where Raleigh constructed a water gravity feed system over the summer. Here we managed to talk to the head of the village with a translator to see what he felt about the work Raleigh did and if there was anything else he could see being beneficial to the continueing developemnts of his village.

This village already has electricity at the school where there are solar panels. This is a complete luxury.

It is hard to describe the initial reaction I had upon arriving in the village. Although far more developed than others; there is rubbish everywhere, children running around in bare feet and sanitation seems to be lacking. Even though there is now fresh water going to each house. It is in no way like plumbing systems you would recognise at home. Most of the pipes are actually outside the houses and the pipes simply lay along the ground all over the village. 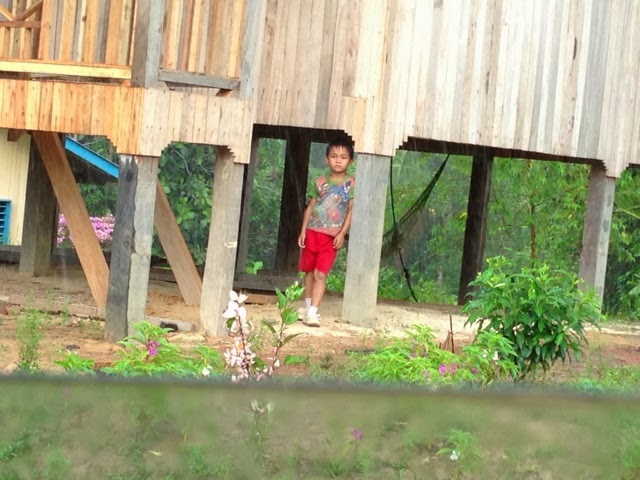 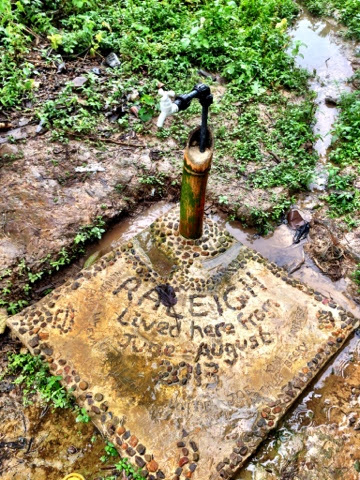 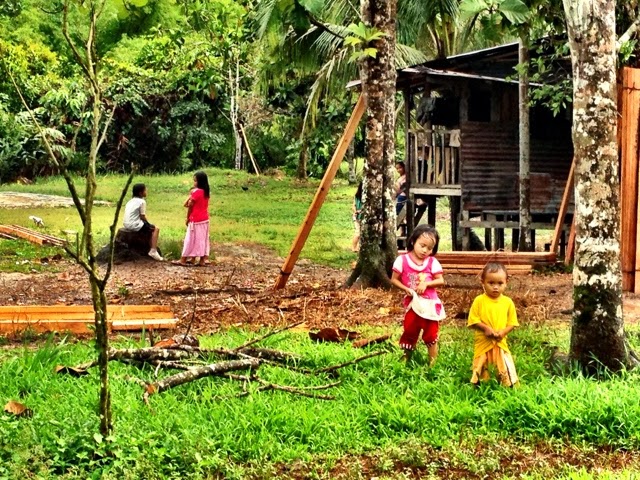 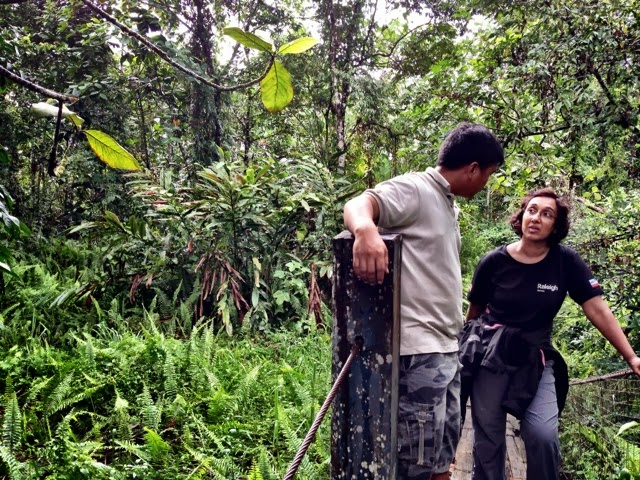 When I completely immersed myself within the context of that village I very quickly realised how big this world is and how little we are within it. Communications and technological advances have bought the world closer together of course, but here in this village I am so far removed from the rest of the world. Here kids grow up playing in the forest not glued to a Nintendo. Here kids used to have to walk a mile to get water and to wash, not 2 meters away to sanitised showers or just bung clothes into a machine that washes them all for you. It is so far out of what I know that it almost isn’t shocking. Its easier to just accept it as a different culture or way of living than it is to judge it against your own ways and standards of living.  What we define as poverty would be this. I would argue however that in many ways they are better off not to have the materialistic bizarre western social media issues that we have integrated into our task based existences. One sickening thing that I did notice though was that in some villages on the way to Alpha 2; villages that weren’t too far out from the city but still remote and full of poverty; They had satellite television and electricity but no sanitation or clean water. What is with that? Its seems so backwards!! 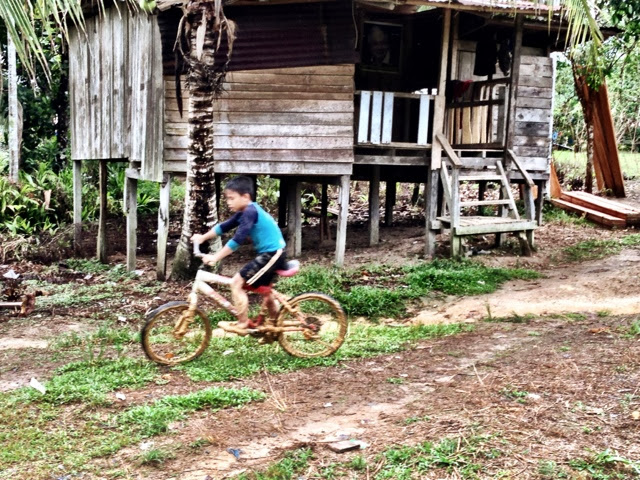 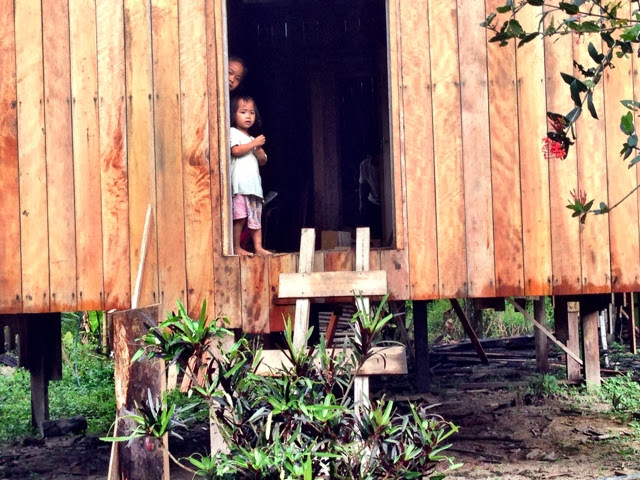 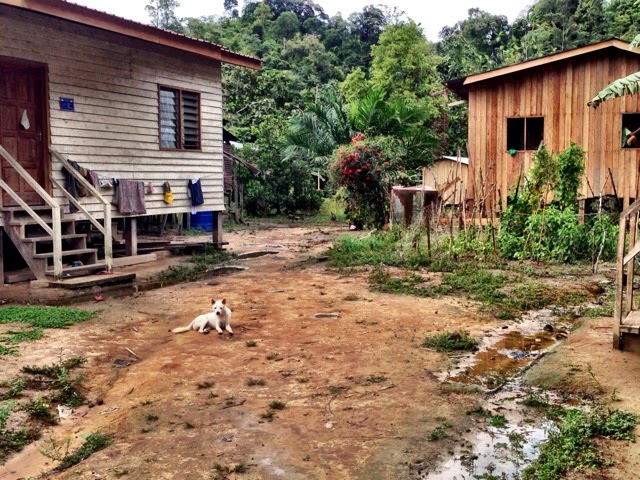 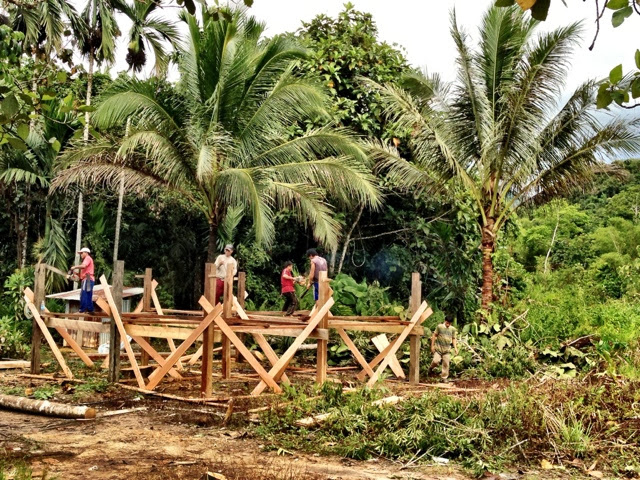 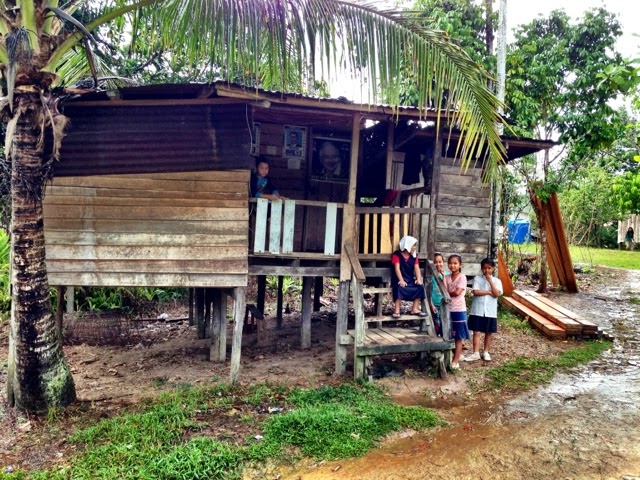 For me one of the most exciting and scary moments was actually getting to the village itself. This is about a 20km “road”. It is simply a single track off road mud and dirt and rock track. I have never experienced anything like the 3 hour drive it took us to get to the village. I was being thrown around like snow in a snow globe. I mean, we are going about maximum of 5 miles an hour the whole way. You simply can’t go any faster without being an inexperienced idiot and probably damaging the vehicle. Plus it was fun. I would argue why isn’t the government building proper roads to these villages, it seems ridiculous, but to take away that experience would be mad. There are positives and negatives to both sides. Better access means easier access to hospitals and education for the villagers themselves, but it also means some deconstruction of forest and makes the villages more accessible to outsiders. It would also be blooming expensive!!! 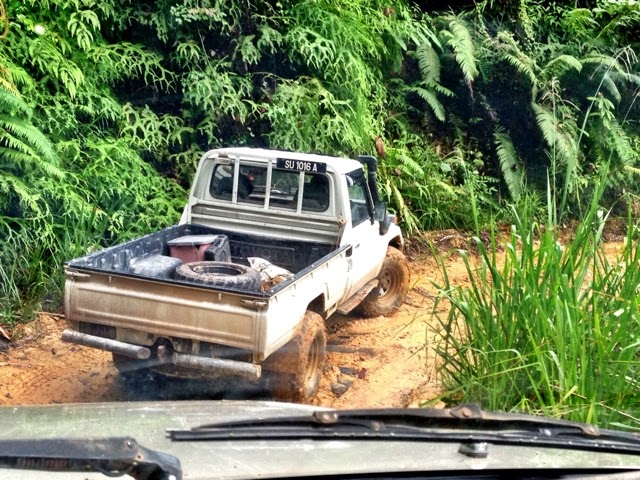 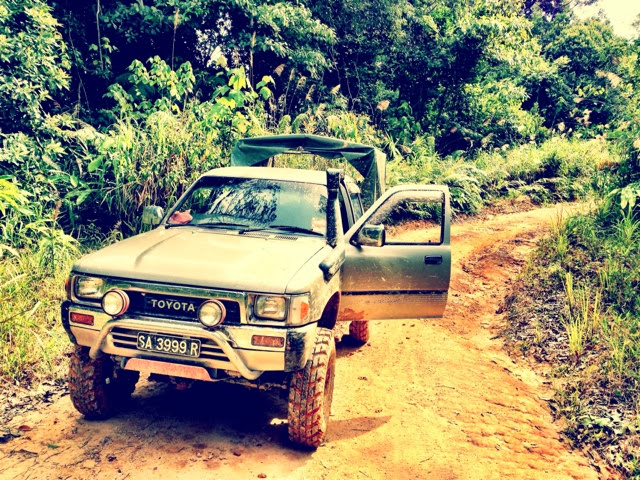 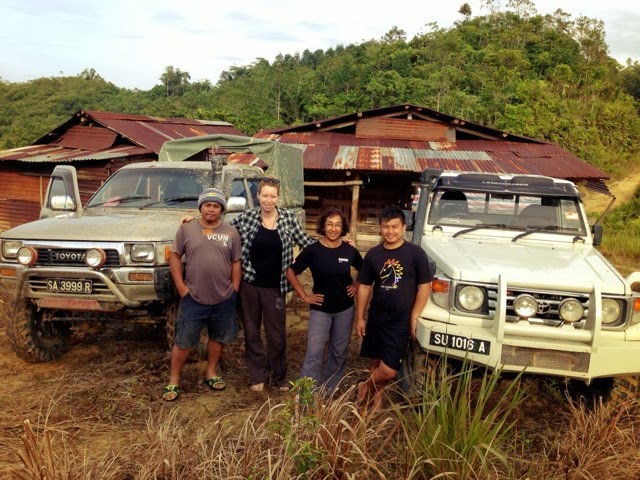 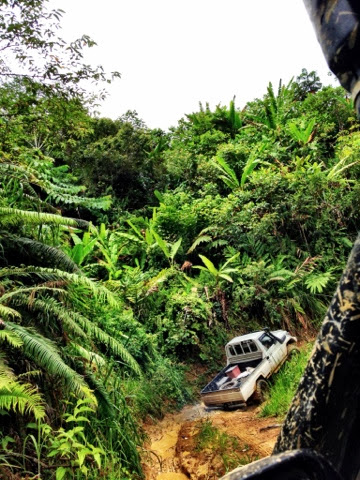 This time round Zed and I were passengers. We had a driver who spoke no English drive behind Eddy who is our AFC representative. I am literally still in awe at the pure skill they have of driving. Next time I will be on those “roads” will be on saturday this weekend when I am partaking on the loop with Linda (our finance manager) and Kris (deputy project manager) and visiting all the project sites to deliver more equipment and the shop etc. This happens every phase as I have previously mentioned. Each Alpha group has to put on a show for us, or just some kind of entertainment. They also have to cook us the most AMAZING meal that we actually judge and crown one team as the winner at changeover. So I am certainly looking forward to what they can do!!

I am pretty nervous about the drive into Alpha 2. The village is on the same road as to Kampng Sugondong Mugundai. About 10km before it. So not quite as far, but particularly if it rains it will be a pretty intense, adrenaline fueled journey. Fortunately we are following Eddy into the village. He is an incredibly experienced driver.  So I do feel a little more relieved about the situation. Last loop they didn’t follow Eddy and ventured out on their own. Unfortunately they had gotten stuck a few times and although the pictures look like they had an amazing time, I would rather avoid that situation arising in the first place…

Zed and I and Eddy and the other driver stayed overnight at Alpha 2’s village. This is where Tim has been working and so it was really great to catch up with him. I think he really appreciated seeing me there. We slept in a newly constructed house that had stunning views over the rainforest and mountains. Because we were in the mountains the air was a lot cooler than it is in the city. A wind swept through the village overnight that kept me awake and I didnt have the best nights sleep in the world. However it is an experience, and I will be sleeping there again next week on the loop!!

In the evening we had dinner. Zed and I had managed to buy the team some fresh fruit and veg, so we had a meaty casserole. It is quite amazing what you can make out of Raleigh rations which consists mainly of tinned goods! It was great to catch up with Rae, Angela and James the project managers for Alpha 2. And of course for me it was great to see Tim. He seemed to be having a good time and immersed into the group well. He has had some problems with his back. Lots of walking and heavy lifting. But to be honest this is the kind of work that he is not really used to, so its probably good for him!! 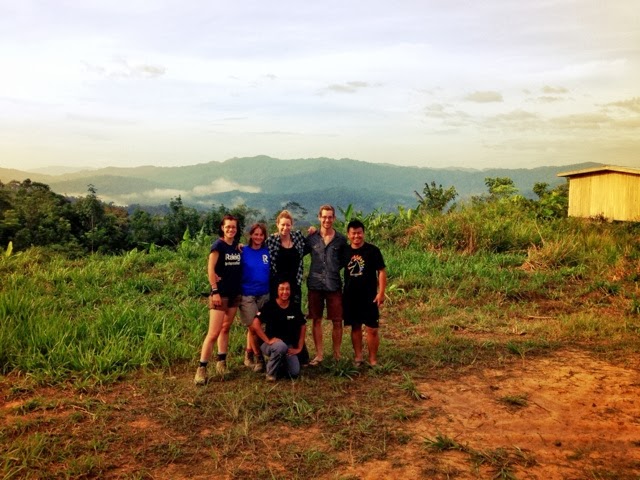 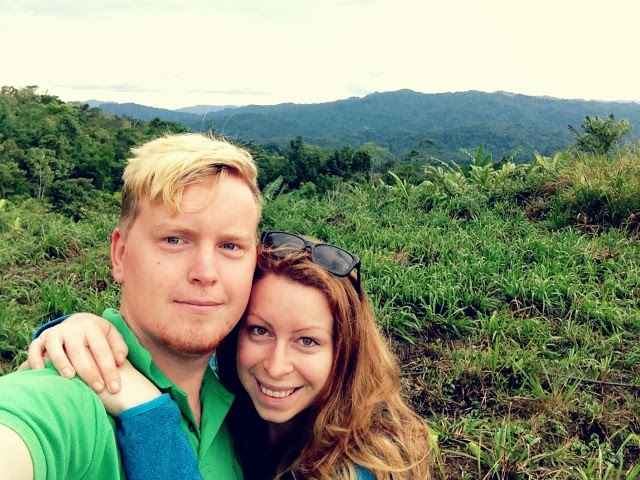 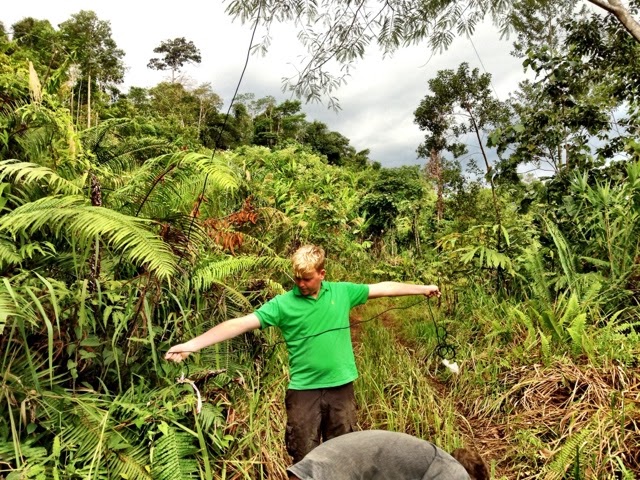 We left Aplha 2 at around 7am the next morning and after our 3 hour drive back down into Kota Marudu Zed and I stopped off for lunch before going on a little drive a little further north to visit a honey farm and a famous longhouse both recommended in the Borneo travel guide book. Really glad we did this. I guess there isn’t much time to do tourist type stuff. Most of what Raleigh does is in such remote areas that hardly anyone has had access to before. But it is nice to be a tourist sometimes. 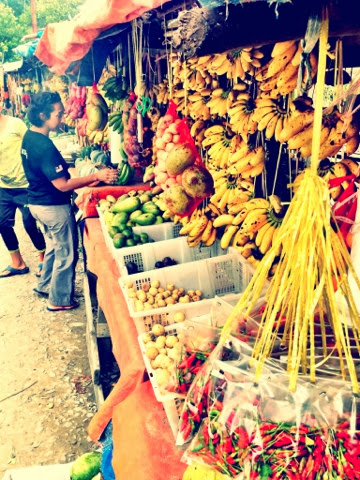 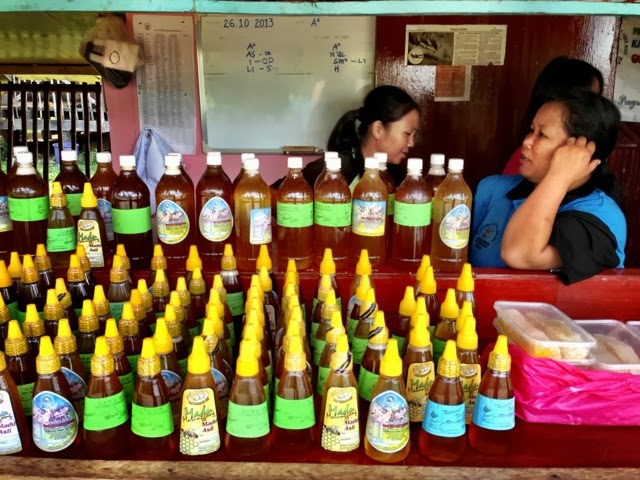 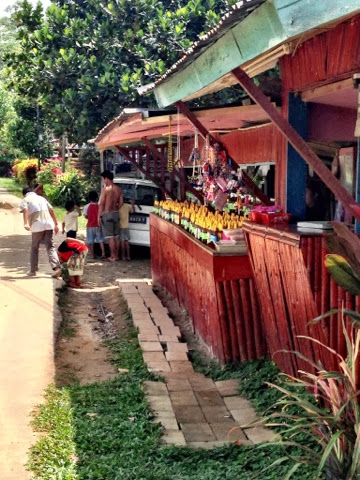 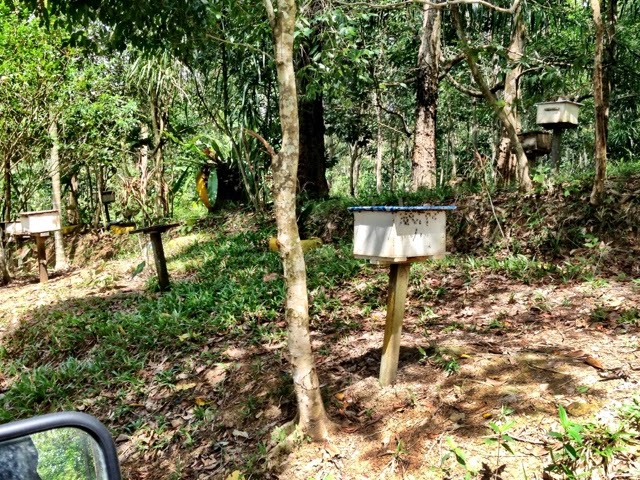 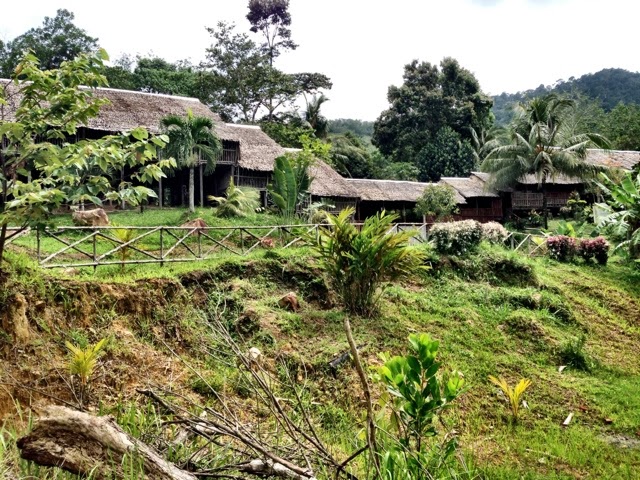 Overall a fascinating trip and I am so glad that I had the chance to go. A great insight in how to construct and form charity work including sponsorship and working with other organisations.I want to do more work like this! Am now at the point where I am seriously considering coming back and doing another expedition here. Perhaps even the next expedition. Who knows. Still trying to figure lots of bits and bobs out in my head!!