Venturer induction week done, and onto phase one!

Phase one see’s me at field base in the city. I’m not due to go anywhere this phase, so its 19 days in the house, and perhaps a few occasions to drive around the city on errands. Mainly I will be organising for phase two. Ordering the food, getting together any more equipment requests for each project group. Each project group (apart from the two trek groups) are visited by the loop that left 2 days ago. So up until they left each project group got a chance to ask for more equipment, food etc.

Some of the requests were increasingly frustrating. Extra food (they can’t seem to ration properly they had more than enough food!) equipment that they didn’t foresee needing and now need. But this is the whole point of the loop, so we just have to get on with it! The loop also take around the shop, so we had to go shopping for more bits and bobs before the loop left. Then they also take personal blog posts and general post out to the venturers and PM’s.

The day after we got back from base camp was Kris’s birthday, so field base staff arranged an evening of ridiculousness. This included cake, party games like; sardines, wink murder, hunt, musical chairs, pass the parcel, consequences, and our very own version of pin the tail on the donkey. Our own version was called ‘THE FINISHER’ Kris is renowned for finishing off peoples food at field base. For instance a take away pizza I got had mysteriously vanished from the fridge. Well the box didn’t, just the pizza in it. Like seriously, who puts an empty pizza box BACK in the fridge. Its almost like putting an empty milk carton back in the fridge back home (mum I can now sympathise) Kris has also finished bread, cookies and all sorts. Debs and I have to come up with names for the PM’s by the end of the expedition. These names will go on their t-shirts. So Kris’s is the first name thought of. Due to his reputation we made him eat the remainder of his cake with no hands. This we got on film and I will put online soon 🙂 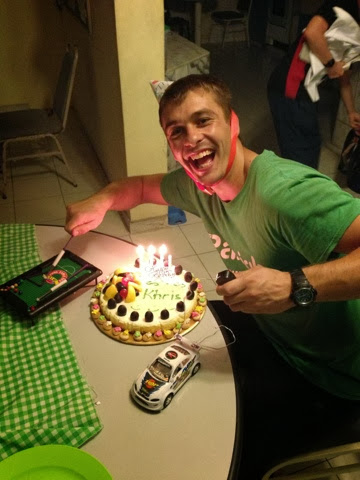 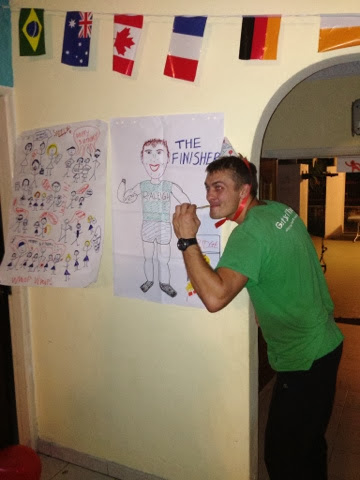 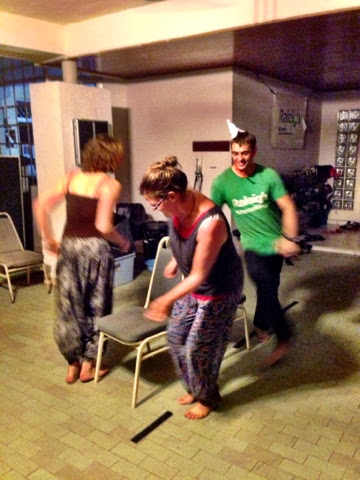 Me and Nat had a day off together on the monday, and so we disappeared to the waterfront where we had lunch at the meridian hotel and i got a 90 minute full body massage. Really needed after all the heavy lifting and tiredness fo the last week or so!! Afterwards we wondered around the markets and bought a few bits and bobs. The day before – Sunday –  we had had a chilled out day of Sunday TV viewing. this included a David Attenborough episode, some of the IT crowd and then a detective 2-part series. Was just like being at home!! 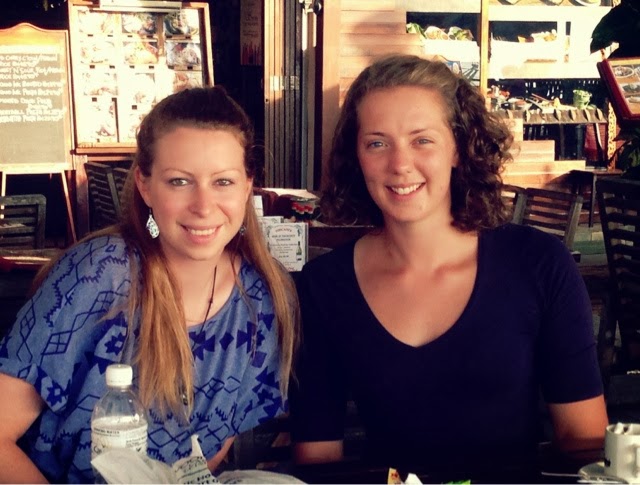 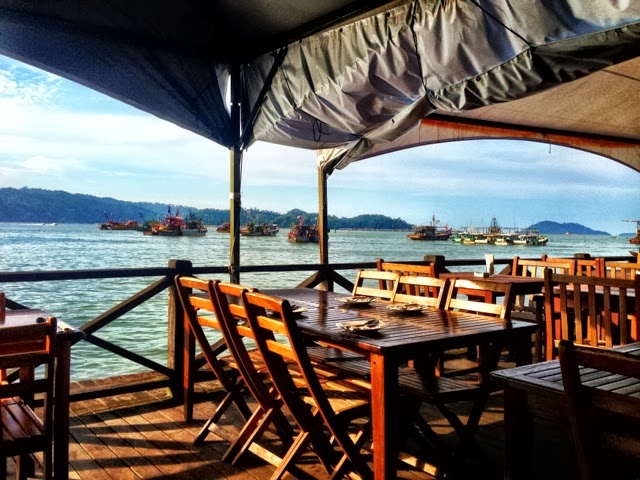 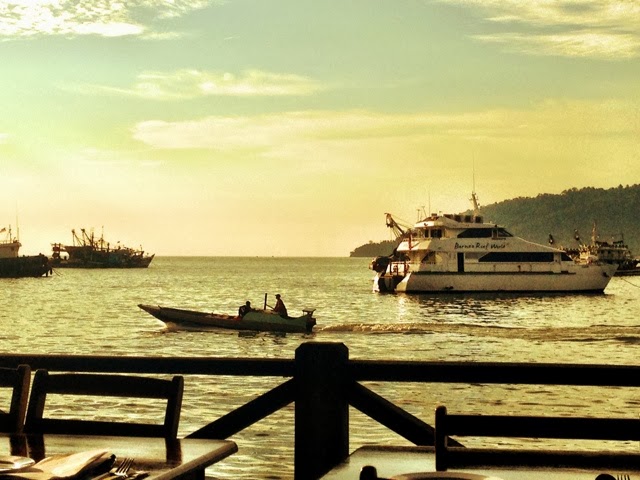 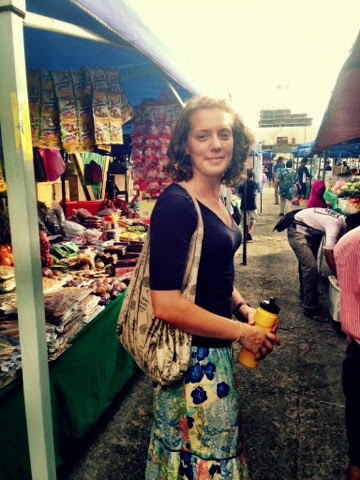 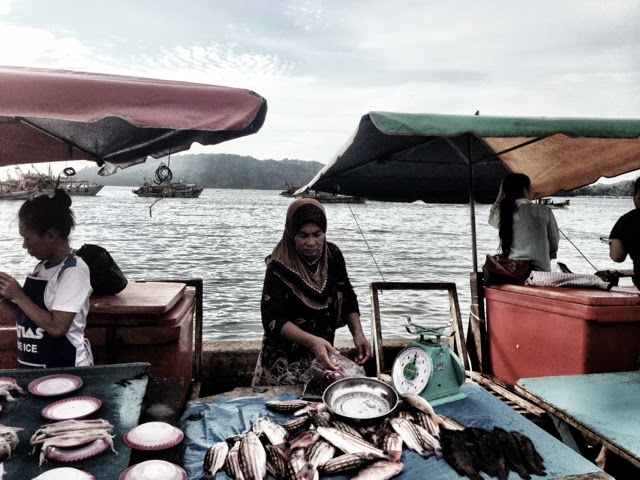 On the Tuesday i spent the whole day blitzing the logs food store. It needed a serious clean and ruthless sort out. It felt good to throw lots of things away and clean the whole place out i tell ye!! Then i did an inventory of all the food at the same time and worked out what food we needed to order for next phase, and then ordered it! 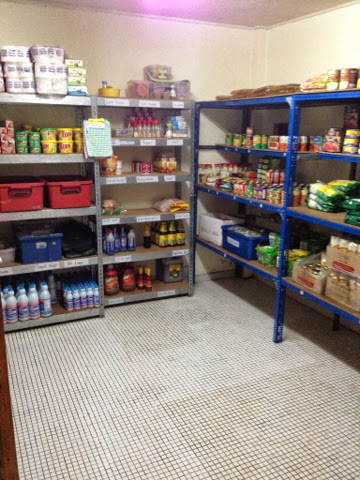 So relatively on top of the game with regards to LOGS duties.

Managed to speak to Tim over the radio on a confidential comms. Think he was just having a hard time adjusting to yet another new environment. And probably testing the water to see if i actually was just at the end of the radio….bless him. Big exciting times for him!! Hoping he is learning a lot about himself and really getting involved!

So the loop left on Saturday morning for Alpha one. On the loop was Kris, Debs, Nat and Alistair. So i am the only logs person left along with Jen our medic and Linda, who had just returned from her week with Alpha 3 in Imbak Canyon. So just the three of us here at field base!!! Its very quiet, and I feel I may get cabin fever…. Mac the country director comes in every day to work in the office, and stays slightly later in the evenings now there are only 3 of us here. Its quite fun!

On Sunday we had a day off and I decided to cook for our little gang. A ‘Becky salad’ for lunch, followed by steak and chips in the evening. Then we watched the first lord of the rings extended edition before doing radio Raleigh. Every Sunday at 4pm we do a radio Raleigh. Essentially all the project groups tune into the radio and field base feed them with the latest news, sports news and entertainment news. Then each alpha get a chance to give us an update on their news too. Its a fun thing to do, and we spent the morning trying to find out the most random bits of news we could find. I also did a stupid facts section. It went as follows:

So there we go, so random useless facts….

After radio Raleigh we had another Sunday night viewing including more of the IT crowd and also a 3 part series called Exile. Worth the watch!!

Also managed to face time my mum and dad who are somewhere in the south china sea after leaving Ho Chi Min City in Vietnam. Its bizarre thinking they are probably within a couple of hours of where I am! Me and Tim here and the other boys all back in the UK. It feels bizarre that we are all so spread out. Mum and dad go to komodo island next on their cruise and then finish off there cruise in Darwin Australia in about 5 days time! Can’t believe the time is going so fast!!