So! After 3 weeks of hardcore training and fun, the venturers finally arrived to put all our lessons and training to test. For the logs team this is the busiest time for us. We had to set off to base camp early to meet ‘hin gen’ – who we ordered all the food off – and then the same morning we had organised for a flatbed truck to pick up all the equipment from field base and take to base camp. However the flat bed truck never arrived. Therefore we left without any equipment but arrived in time to get the delivery of food and load it all into one of the army tents for distribution into alpha groups later.

At base camp there is a central bamboo hut where we all have breakfast lunch and dinner. During venturer induction week and changeover the mobile office and shop are based upstairs. There is also a container in which Raleigh keeps bits and bobs between expeditions and between phases. Things like gas canisters and stoves and kettles and tarpaulin. It is also up to logs to set up the bamboo hut.

So already tired we then greeted the arrival of the venturers. At this point I was really excited to see Tim!! He had been picked up with the rest of the venturers at the airport and taken straight to a swim test at the city swimming pool we use (also where the Malaysian team trained for the 2012 Olympics!)!

When Tims coach pulled up it panned round and we were all stood there waving. I was searching for Tim amongst the faces on the bus all smiling and waving, and then there he was! Fast asleep on the back seat of the coach!! Was very funny. When he opened his eyes he saw me and looked very confused!! 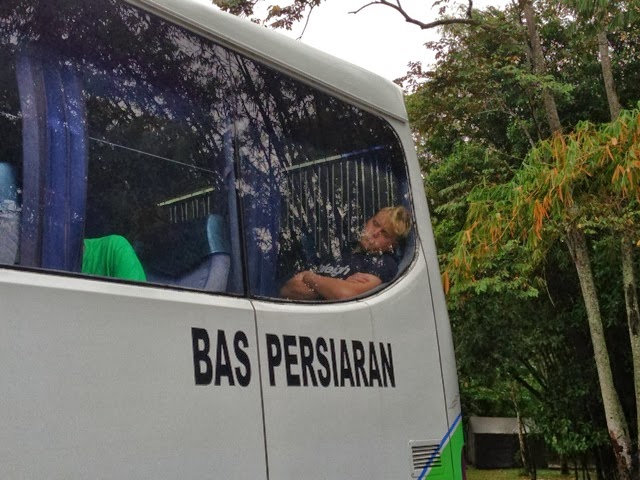 Once off the bus we had many hugs over the course of the afternoon. I however had to disappear back off to field base for the night with nat so that we could be there for the flatbed truck at 7am the next day. We arrived back at field base having driven in the dark for an hour. First proper night drive. Pretty weird. No cats eyes and the weather was pretty miserable and due to be rain all week. So pretty exhausted we had a short sleep before waking up to load up the flatbed truck. We then waved the truck off and had to go to cerelins to pick up and order more equipment. Stop of at the city mall to pick up various other bits and bobs, and then headed back to base camp.

The week for logs consisted of separating all the food out into alpha groups, and all the equipment out into alpha groups. A pretty big task especially in the pouring down rain. I did get a chance with the other logs team members to pop into the jungle for an afternoon to visit 3 alpha groups doing their jungle training, including Tims group, and that was a really nice break from the hard work of lifting and moving heavy boxes and equipment. I think my arm muscles are already henched up and toned! I expect to be pretty buff upon my return to the UK next year!!

Tim really mucked in with his group, and despite them all being exhausted, having been thrown into the jungle pretty much straight away from a long haul flight, they all seemed in pretty good spirits.

At base camp we all sleep in static bashas. I was assigned to one delta team ( the venturers are split into delta teams for the first week, and then for the first phase split again into alpha groups, so they will always be with different people throughout the whole expedition) and so I slept with them in one static basha for the week. My hammock was particularly short and with that and the torrential rain every night and the constant mosquito bites I didn’t have masses of sleep at all.

We did observe  the venturer Raleigh Olympics which was pretty fun. And when the venturers arrived the host country venturers (having already stayed me night at base camp) had prepared a traditional welcoming dance for them.

It was a hub of activity all week. Morning meetings, evening PM and field base staff meetings, training for the venturers. During the week a man called Din and his wife cook lunch and dinner, and this gets collected by logs every morning and evening from a garage about 20 minutes away from base camp. Just anther thing on our daily to do list!!

At the end of the week we realised we were going to have to do one shift of driving equipment and leftover things back to field base the night before deployment on the Saturday (12th October) so Alister and I left base camp at about 10pm for field base. Arrived back at about 11.45pm, unloaded the vehicles and then had about two hours sleep before waking up around 3am to drive back to base camp. The alpha teams had been allocated the day before and they were all to set off at 6am.

Tim is working his first phase in a remote village in the north of Sabah where there are about 10 villagers. Here he will be starting to make a gravity water feed system for the village. Exciting stuff for him! And apparently by far the most labour intensive community project… So with lots of hugs and farewells the field base staff waved goodbye to all the PM’s and the venturers for 19 days! The first phase! Tim had managed to dump a bunch of his belongings with me to look after for him, and indeed in return to field base a few of his belongings had also found their way to lost property… I am wondering what he actually has left with him!!!

I am excited for him and I know he is going to have an awesome time. Really looking forward to seeing him at changeover and hearing all about his experience in the village.

Meanwhile for the rest of us it was back to base camp to unload and sort out an awful lot of stuff!! A very small group of us now living in the house. Just 7 of us. Then four of them go on the loop in a week so it will just be three of us left!! Weird!!

To my wonderment and joy on return to field base Loli had prepared us a full English breakfast. My first bacon since I arrived!! I’ve never missed bacon so much!! Raleigh rations for alpha groups and in general are all pork free. So I was literally over the moon. Mainly because my diet at home definitely consists of bacon pretty much every day. I have found a store that sells it though so may have to buy some for my own breakfasts 🙂

The next few weeks will be pretty steady for logs. Not quite so hectic as last week. Need to order food for phase two, spring clean and re stock on consumables. Do another inventory on food and equipment etc. and then there is radio duties and shopping and picking up/dropping off of Loli and laundry etc. 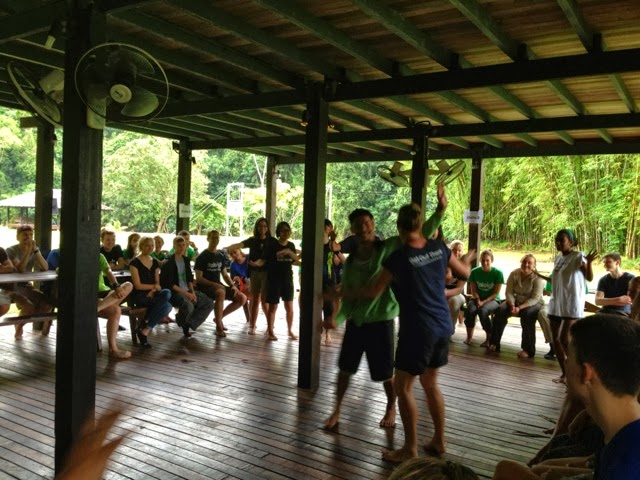 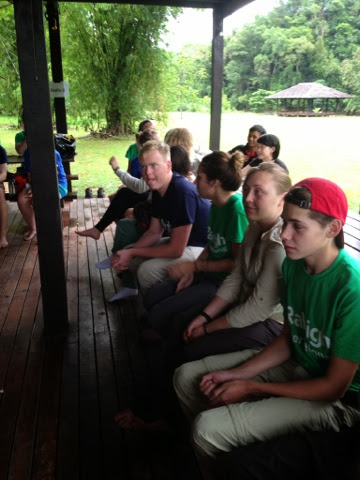 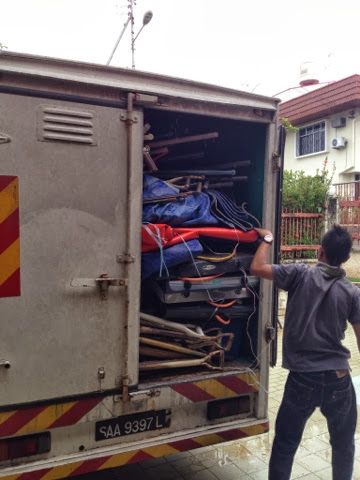 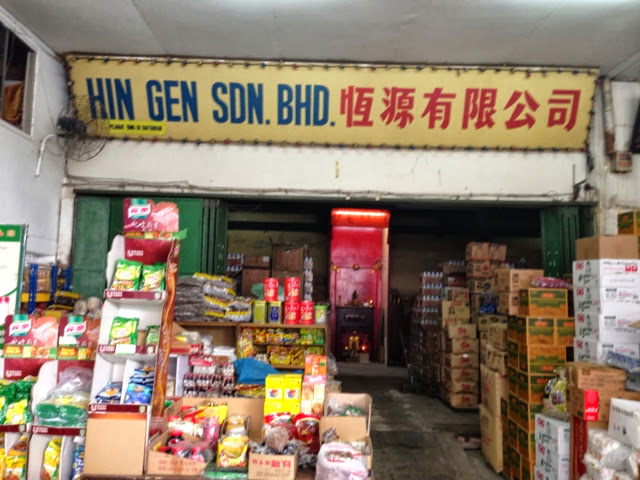 Visit to Hun gen supermarket to pick up some missing stock… 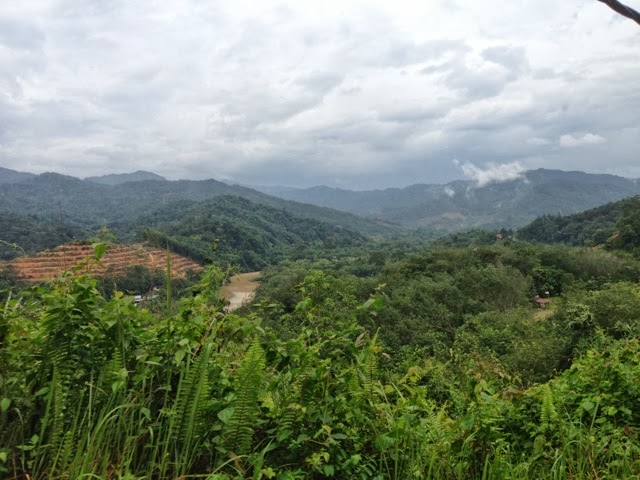 Drive to base camp 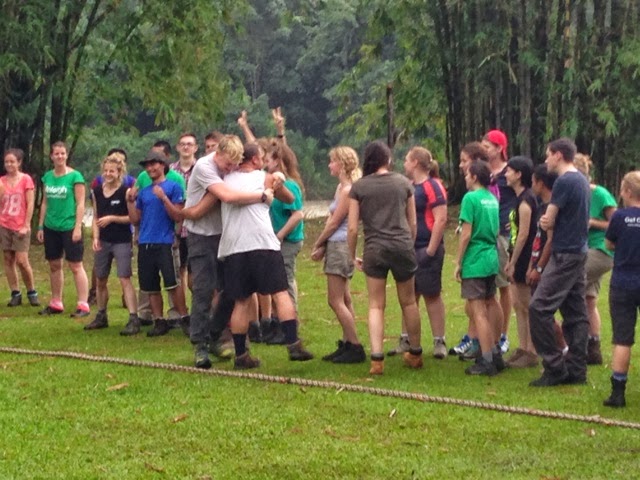 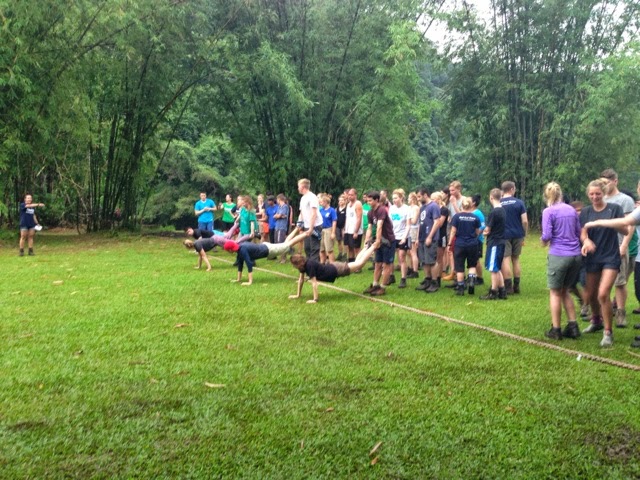 Their version of the wheelbarrow race 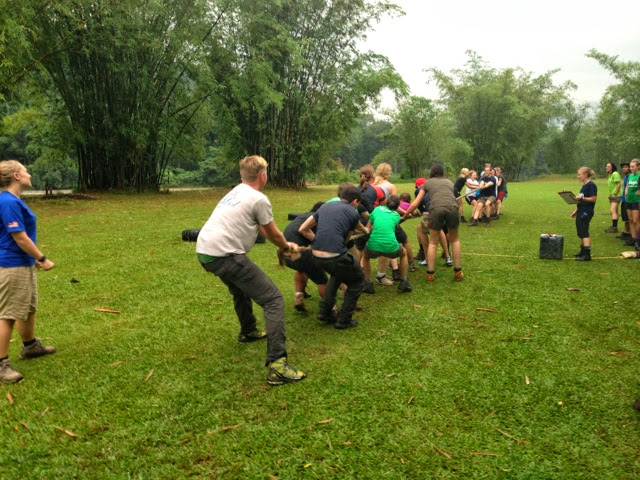 Tim and his delta team 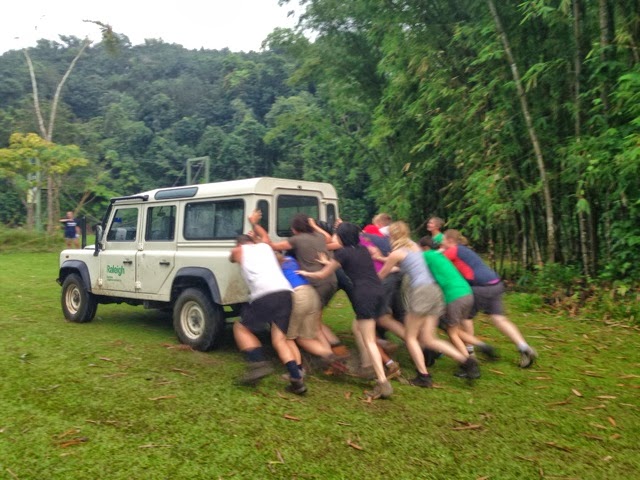 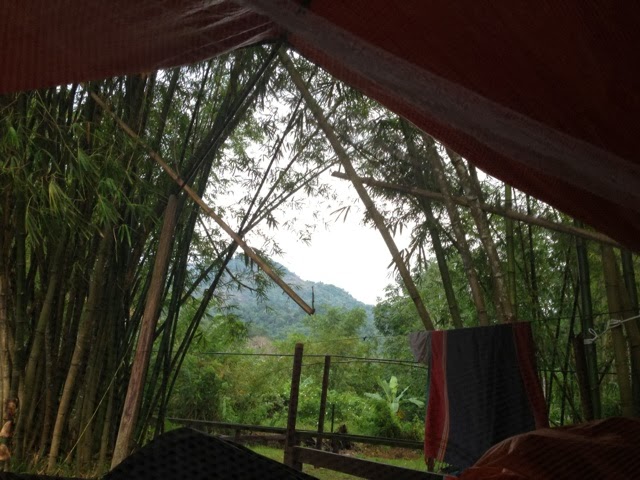 My view in the morning from my hammock 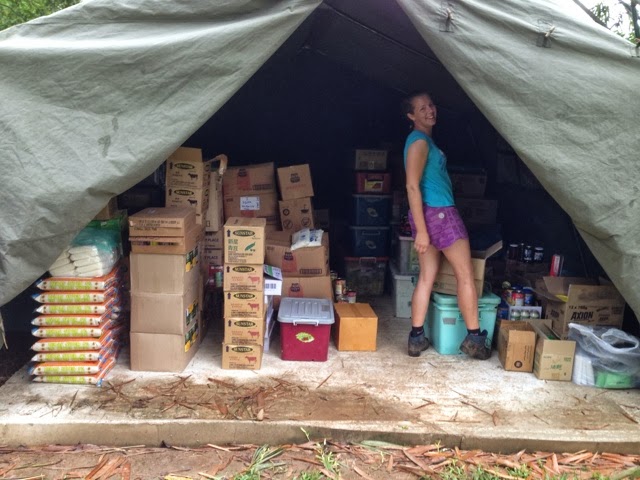 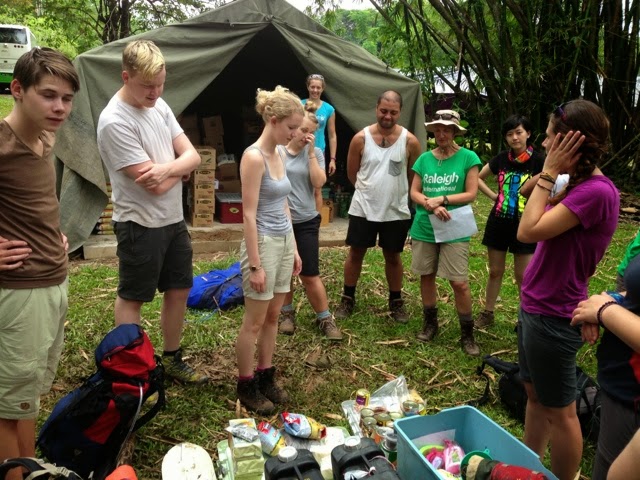 Delta teams to pick up there food and equipment for their mini jungle trek experience! 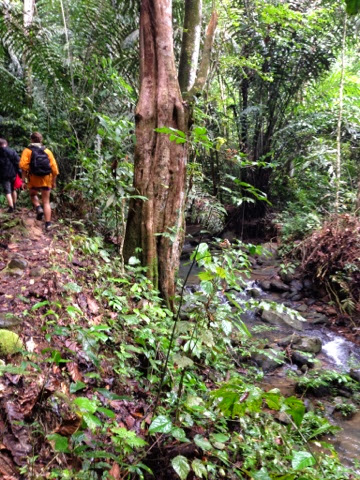 Mini trek into the jungle 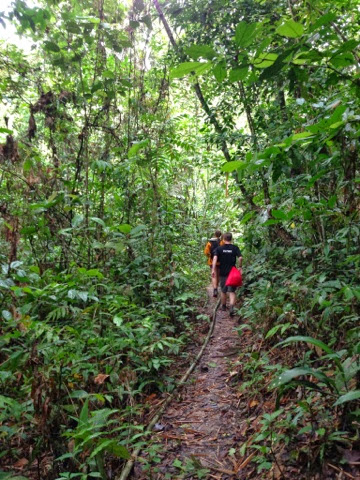 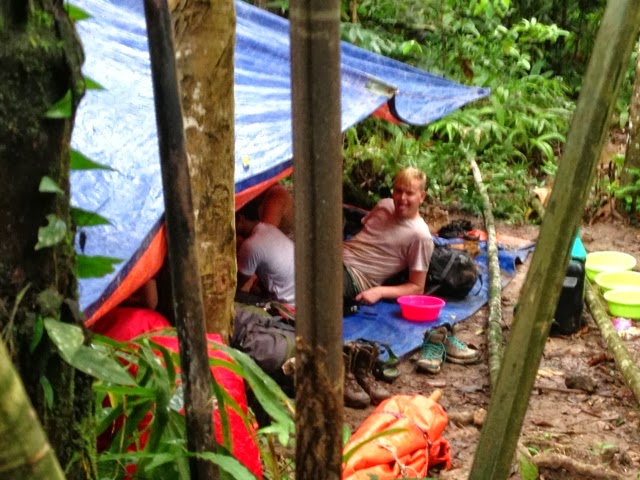 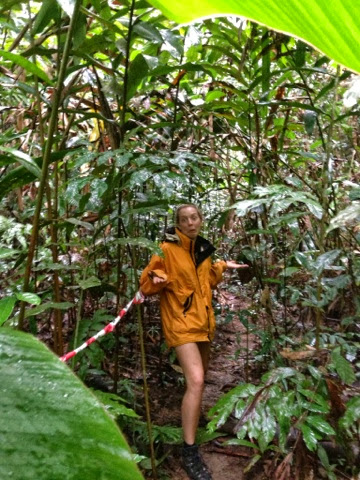 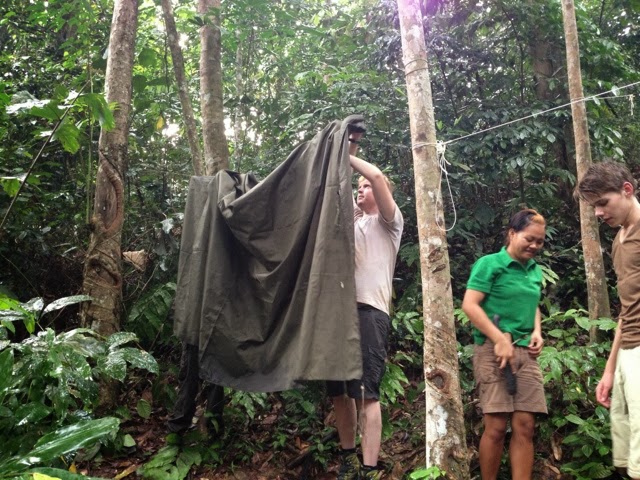 Tim setting up his bed for the night… 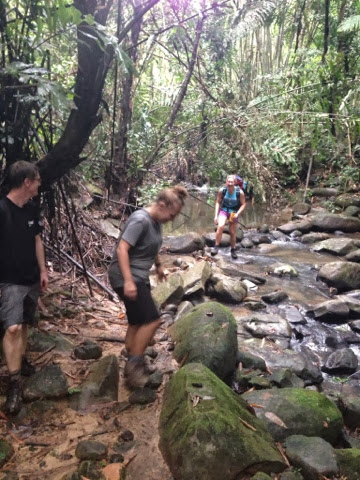 Trek back out of the jungle to continue with logs duties… 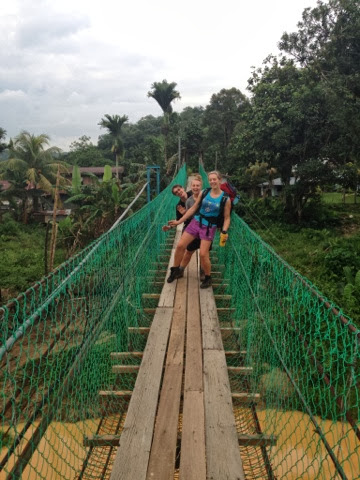 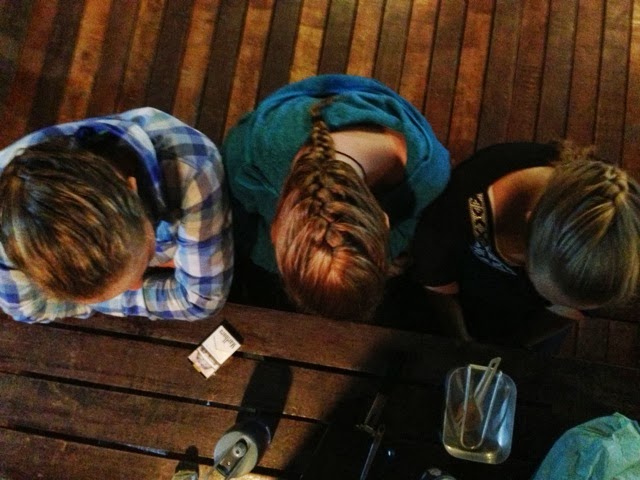 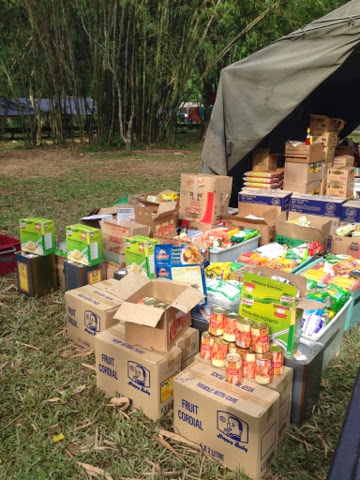 separating out the food 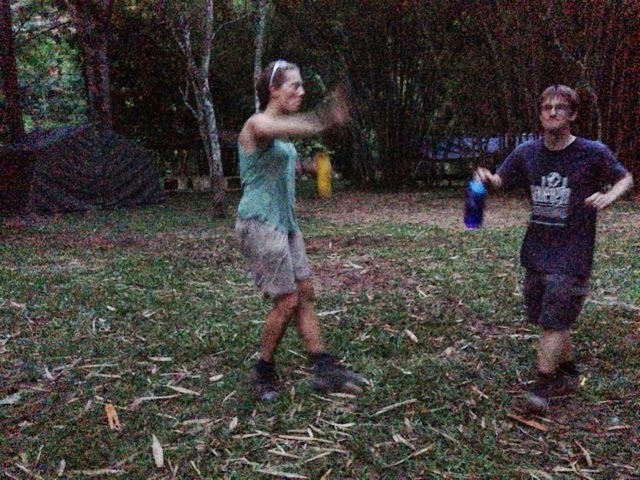 Logs dancing in the rain on completion of sorting out equipment and food for phase one into army tents! 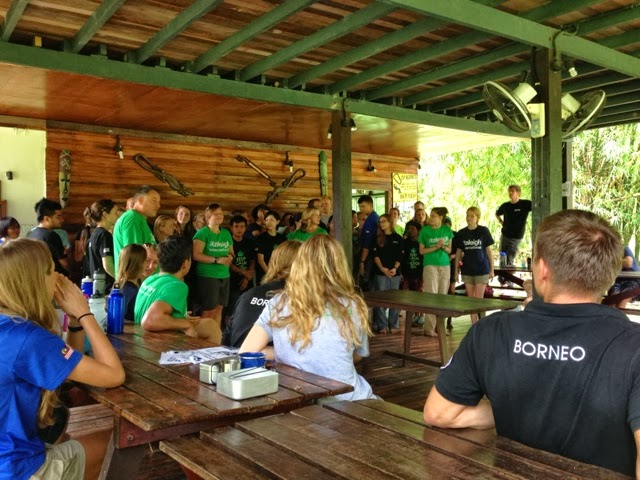 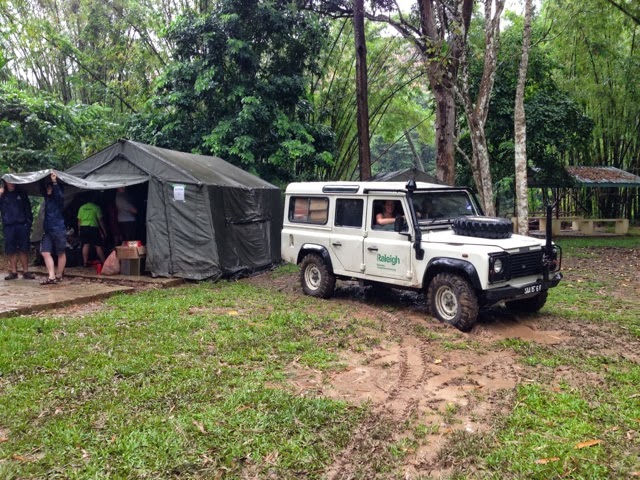 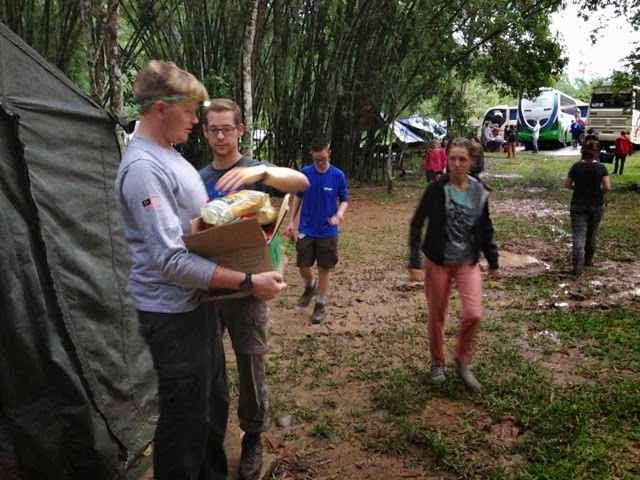 6am getting all the food and equipment into the buses 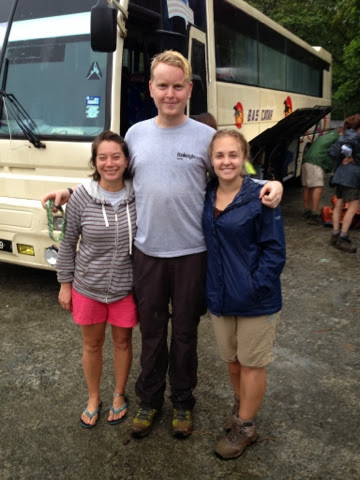 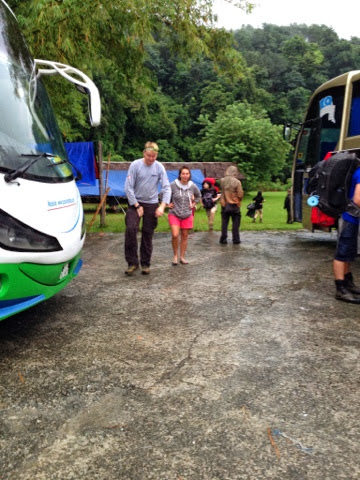 Off he goes for phase one!!! 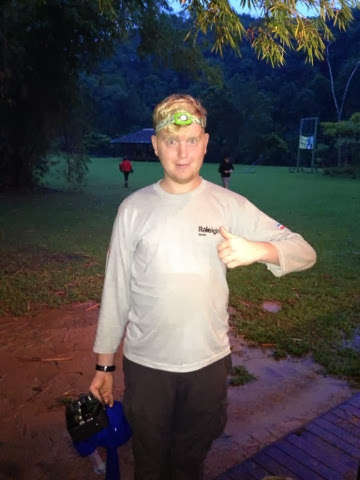