On return from jungle camp with the PM’s last week I was sat by myself in the girls dorm at field base talking on FaceTime to home when a scorpion just crawled out along the floor right next to me…. I wasn’t really startled, more intrigued. I think someone must have bought it back from the jungle in their bag or something. Anyways, because I am no killer, I decided to just trap the mini beast under a cup and leave it for a manly person to deal with later. A few hours later, Chris one of the PM’s is summoned into the girls dorm to remove said scorpion. Carefully placing paper under the cup and walking out the room, I am then greeted with praises from a few of the girls at my cool calm deliberation in trapping said scorpion. The proud moment did not last long however as Chris re-entered the room to exclaim that he was very sorry but there was no scorpion in the cup. Baffled by the fact that this scorpion had escaped said masterful captivation we then blitzed the whole room including bags to find the miniature beast in some dark place. It unfortunately was never found. And to this day is perhaps still lurking around in the girls dorm…. 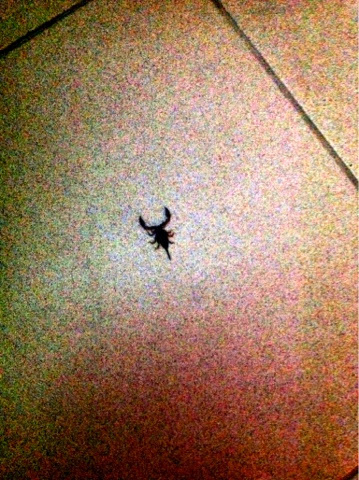