A couple of stops down from Oakland a spiritely looking fellow boarded the train and was assigned the seat next to me. Jon Jon (real name johnoscar) was on his way to LA to meet his mother then fly out to El Paso Texas with her. We jibber jabbered pretty much the whole way to LA. Jon Jon is a professional pianist and has toured al over the world. We got along pretty much straight away. He recently got married to his partner Kevin last week so was still pretty excitable about that. Very exciting times! He was also incredibly generous and bought me dinner in the food parlour where we watched the sunset together. The train ride was again absolutely stunning. The California coast absolutely beautiful and we weaved our way inland and then back out again passing remote desert towns and then seaside towns and resorts. There was no overnight on this train ride, and so we were to arrive in Los Angeles at about 9pm that night where my wonderful friend Perrin was to pick me up. 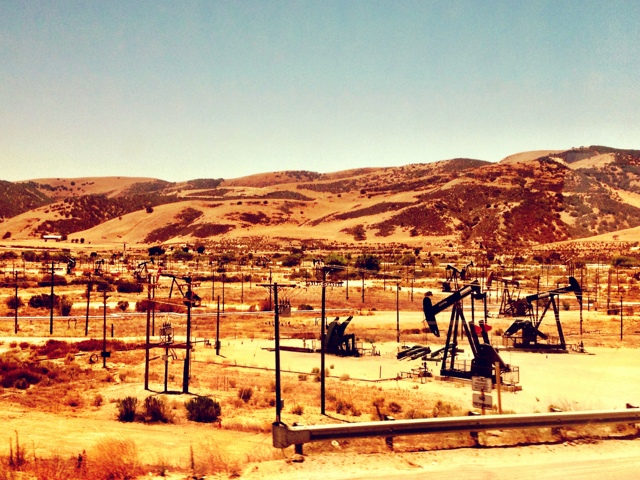 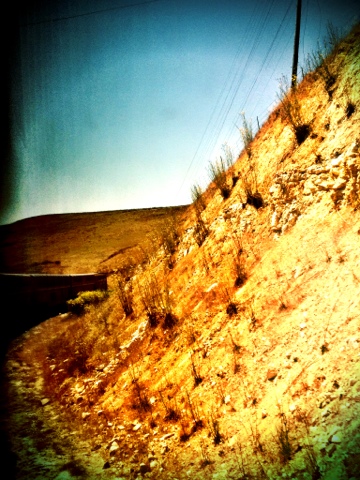 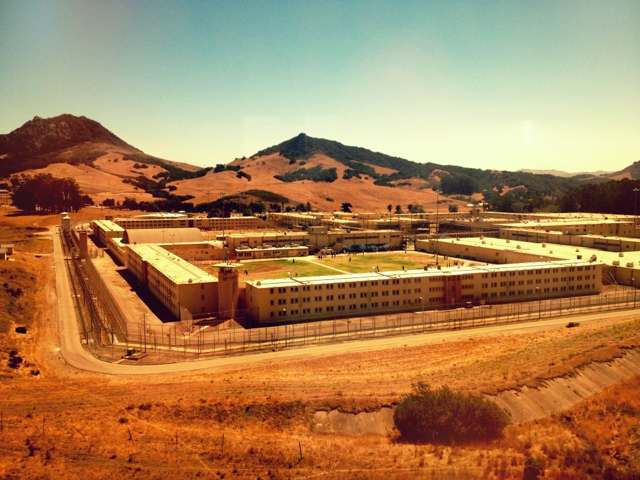 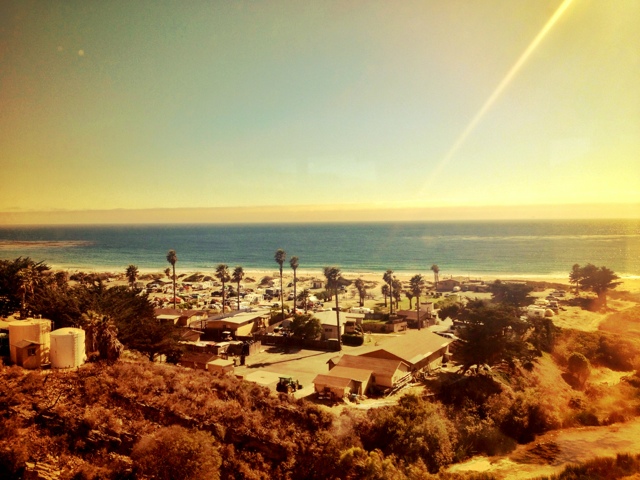 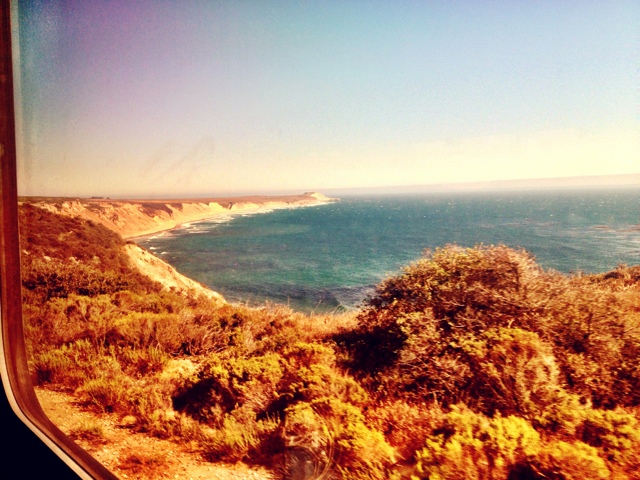 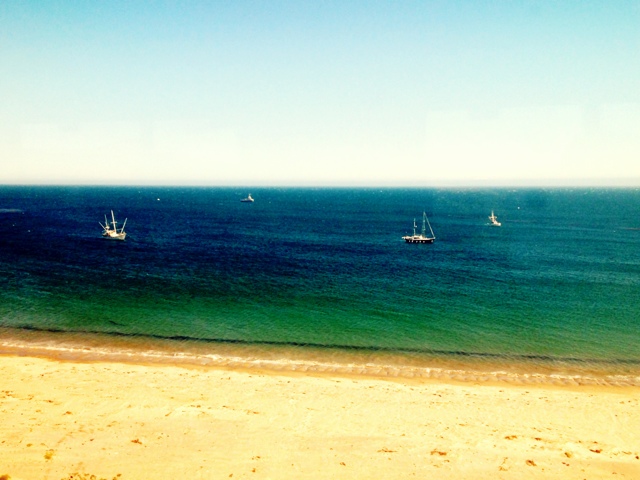 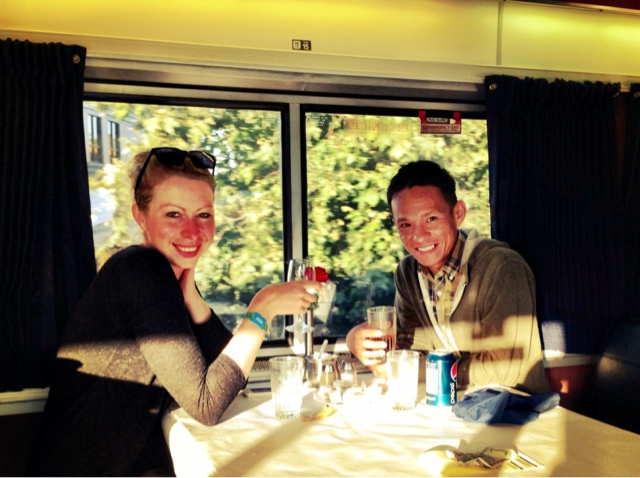 With a big hug I said goodbye to my new friend in Los Angeles promising we’ll stay in touch and that he should come play venues in the UK and I should be his international publicist 🙂 I will see him again I am sure of it!

I had mixed feelings about coming back to LA. not because of my amazing friends that I made when I was last here, but because when I lived here in 2008 there was a mixture of experiences thoughts and feelings that resulted in the overall opinion that I wasn’t too fond of the place.

It is a bizarre city. No apparent centre, sprawling suburbial towns drifting on into the horizon line. I mean, you would be forgiven to think that downtown was the centre of the city. Truth is when I last visited in 2008, I only actually went there about twice in 4 months. I spent most my time then in west LA, where our apartment was based and in Santa Monica where we were working. Ultimately after that, and after befriending the marvellous Perrin, we then spent time in Malibu at her parents house which was in a beautiful setting right on the beach.

I was very excited to see Perrin, and Graham, the two amazing friends that Amie and I met in 2008 whilst we were there. Perrin has been over to the UK and stayed with my family since then, and also she has hosted my parents and youngest brother Timothy’s stay in LA last year. So we have constantly been in touch and stayed part of each others lives.

A soon as I saw Perrin at the station I knew I had made the right decision to come back here. Tainted though the last visit to LA was by the unfortunate happenings of circumstance that Amie and I had lived in (we lived with a large, drug taking, irresponsible, supposed to be absent, Canadian lady for four months sharing a not massive bedroom between the two of us – it was intense!) I am not ignorant enough to believe that the experience would be the same again a second time round.

This time there really was more freedom and I definitely saw a whole other side to LA than I did before. I think is is inevitable due to the fact that I am five years older, perhaps 5 years wiser, and I am in a much more open minded non constrained place in my life.

I am sure Perrin won’t mind me sharing a small part of our story on how we met; as it will give a good insight into our relationship and the bond that we share.

Basically, I only met Perrin about 2 months into our stay in Los Angeles in 2008 through our wonderful mutual friend Graham. Graham persuaded Perrin to come to a show that he was going to with me and Amie. At this point Perrin didn’t get out and about too much for various reasons, and at the same time Amie and I were having a rough time with our crazy landlord- eating mayonnaise whole and by itself from the jar- lady. We basically hit it off straight away, and to this day Perrin thanks us for getting her out and about and changing her life, and mutually I thank her for being my/our saviour to a pretty rubbish situation. I think perhaps we changed each others lives, and I have been forever grateful to have met both Perrin and Graham ever since. They really are awesome people who I constantly feel sad not to live around all of the time!

My few days in Los Angeles saw me driving Perrins old car to Hollywood and up to the Griffith observatory with graham and his boyfriend Joey. We went to Santa Monica pier. But most excitingly I got a glimpse into Perrins fantastic life of swing dancing. She really is incredible! It’s something she had only just begun when she came to visit me in England in 2011. Now she is practically pro, and this fabulous life of dressing up as if you are in the 40’s/50’s and listening to awesome swing music and watching people dance is enough to make anyone want to get up and let their hair down!

At a competition there are various times for free styling and that is exactly what I did! I s approached by two guys and danced with them. It was really rather liberating. Upon leaving LA I promised Perrin I would take up swing dancing on my return to the UK from Borneo early next year. It really is awesome fun. I mostly love the old fashioned way in which the whole scene is constructed. The gentlemen are gentlemen and the ladies really are ladies.

I was sad to leave LA this time. I hope I will come back again one day.