So my time in Seattle seemed to wizz by far too quickly for my liking.

It has been my first visit not only to Seattle but also to Washington state.

Ballard is the area of Seattle in which Sarah lives. A seemingly sleepy, chilled maritime vibe encompasses the location and yet underneath that gives way to the hustle and bustle of newly erected condos and general architectural innovations. In Ballard, there is not much higher than 4 stories and therefore it gives off a resounding sense of being a fishermans town; what with all the water; and if it wasn’t for the glimpses of downtown Seattle from certain viewpoints, you would easily forget you were nearby/in a big city at all.

Water and mountains surround Seattle. The puget sound is apparently never ending on the horizon but constantly surrounded by raised land and in the distance the Olympic mountains to the west or cascade mountains to the east. Of course you then get mount rainier. On a clear day you can see the mountain loom up in the background behind the space needle in downtown Seattle leaving you with that epic skyline you think of when you may think of Seattle itself.

I had no expectations about Seattle. I sort of didn’t want to read about it, or look at it on a map. I wanted to see everything with new eyes, rather than through someone else’s beforehand. I also wanted to see Sarah’s Seattle.

The journey from Chicago to Seattle was pretty incredible with regards to scenery, and in particular how diverse it was. From marshlands, to going over the misissipi river, then onto practically desert and then further along the trip into the mountains and rivers and picturesque and gigantic mountain forests. Coming into Seattle brought me along the edge of the puget sound. The morning I arrived itself was quite clouded over, but never the less the beauty of the water right next to the train tracks and spanning far and wide until an island or opposite land appeared in the distance; was stunning.

When I got to union station in downtown Seattle it was so quiet. My first impressions of Seattle was that you could be mistaken for being just in a big town. It’s not small by any means, but what with the water dividing up so much of the city, everything is so spread out. The reason it was so quiet was because it was the Fourth of July. American independence from us…

I walked out of the train platform area and into the main station where immediately saw miss brink who ran towards me and we embraced just as family does when they haven’t seen each other for a while. I was so thrilled to be there and buzzing at the prospect of being in this city and with lil sis. Walking outside the station there was Sarah’s HUGE truck. I have I say after driving Sarah around in England for a year or so, it had kind of slipped my mind that she could even drive at all! It was a bizarre role reversal, and one I was happy to experience. So we made our way over to Ballard, the clouds were lifting as Sarah explained to me that they have had constant sunshine for weeks and it was the perfect time to visit Seattle in this beautiful sunshine.

We seemed to be in downtown Seattle for only a few moments before we were crossing a bridge overseeing the locks and puget sound. The locks separate the salt water from the puget sound with the fresh water union lake. Union lake is where Tom hanks lived in the movie ‘sleepless in Seattle’, a place we visited later on in the week I was in the city.

Sarah had to work for the afternoon/evening, which in a way was nice as it meant I could chill at her duplex, shower, unpack etc. the duplex itself is awesome. All the houses in Ballard seem to be different bright colours and take on this distinctly American look that reminded me of old town in Chicago. Her friend Lauren from school lives on the above floor, and then Sarah shares with a guy called Riley on the lower floor. It really is everything you could ever need at the age Sarah/myself is at. I loved the little duplex with the veranda style area at the back and a garden, and all the time I’m thinking we are only about 10/15 minutes from the centre of Seattle.

I had briefly met Sarah’s parents and brother at their house before we had ventured onto Sarah’s duplex. And whilst Sarah was out her mum came to capture me and take me to some sort of community centre where there was a band playing and a BBQ/buffet style Fourth of July celebrating going on. We sat at the bar and had a beer and food and chatted and got to know each other. Anne then drove me around Ballard and pointed out some sights and points of interest mainly to do with their family life which was interesting. I then went back to Sarah’s where I showered and got ready for Sarah to finish work so we could go to her cousins on the water to watch the fireworks. And it seemed to watch the boys set off some of their own!

The house was stunning and the food was awesome. I met her uncle and aunt and two boy cousins one of whom was back from uni for the holidays. It was the first time I’d been in the states for the Fourth of July celebrations and I certainly wasn’t let down.

The following day Sarah had to work again and I used the day to catch up on sleep and read and write and settle in. In the evening we went down to the harbour with her family to go sailing and have a picnic onboard. The weather was still amazing and it was such a privilege to go out on the family boat and watch them all in action. It really is part of the brink family life. Sarah and her father and brother had sailed from Hawaii to Seattle in a race towards to the end of last year, so they certainly knew what they were doing and it inspired me to want to sail more for sure. 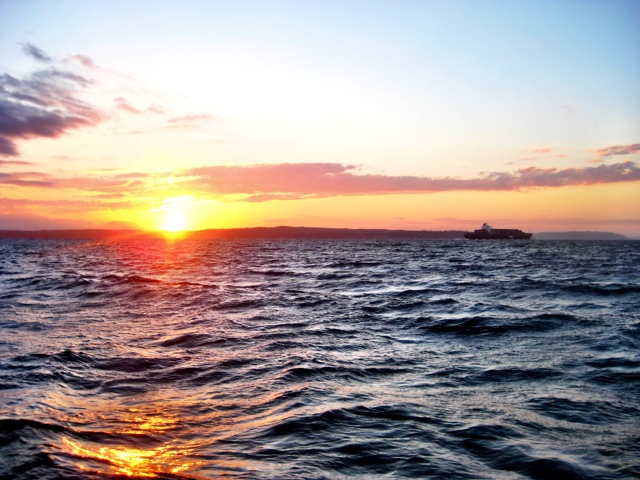 Watching the sunset we then came back into harbour and then Sarah and I went out in Ballard for drinks and food and to just generally catch up and be with each other!

As previously mentioned in another blog Sarah and I spent the weekend in La push on the Olympic peninsula. A stunning resort run by the quillette tribe who feature strongly in the twilight book series. The whole weekend was an amazing treat and gift from Sarah, and I’m so glad we did it. Walks through the rain forests and on the beaches, going inland a little to forks the nearest town. There is a genuine feeling of remoteness and rugged freedom and coexistence with nature. It has not been tainted too much by the human capacity to over populate or develope properties everywhere. 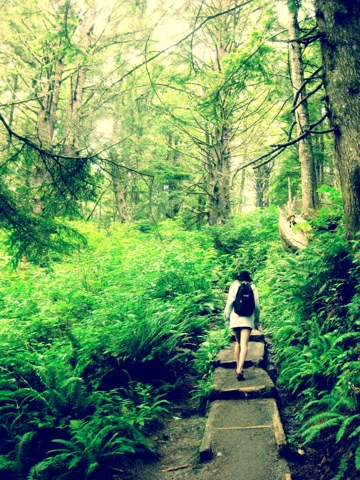 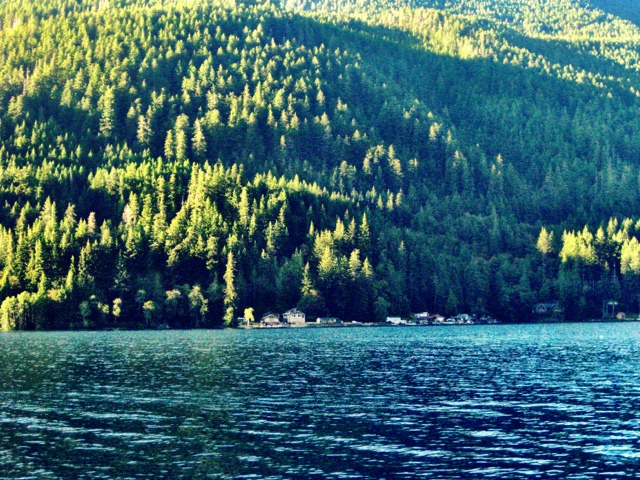 The drive was about 3 hours and on the way we went down via Sarah’s grandparents who live on the water near Tacoma. There house was also stunning and overlooking water. Sarah told me stories of when they all used to go there as children with all the uncles and aunts and cousins, and it was great to get even more of a feel for Sarah’s childhood and upbringing. 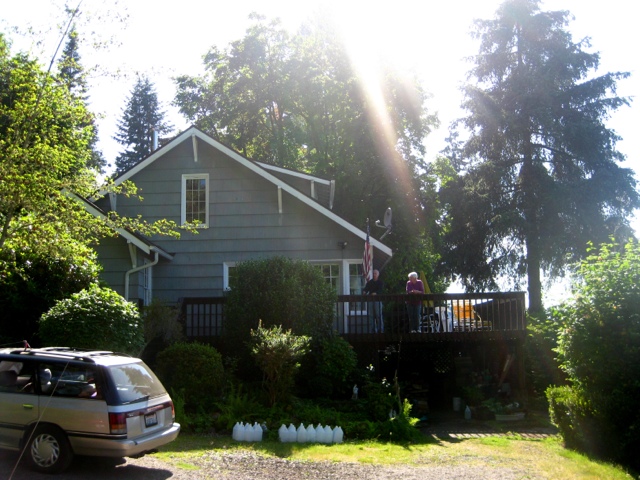 10 days in Seattle seemed to pass by far too quickly. Other highlights included an evening out on the sailboat again but with just Sarah, myself and two of Sarah’s friends Lauren and becky. That was awesome and once the sun had set we headed back to harbour and ate and drank in the cabin until we were too tired and retired back to Sarah’s for sleep. We also took part in the duck tour. Taking us through Seattle by land and water gave a real good sense of the history of the place and we both learnt a lot. On the Friday night before my birthday Sarah and Riley hosted a party at theirs whereby a lot of people turned up to hang out. That was really fun, and a very memorable night in which I turned the grand age of 27. 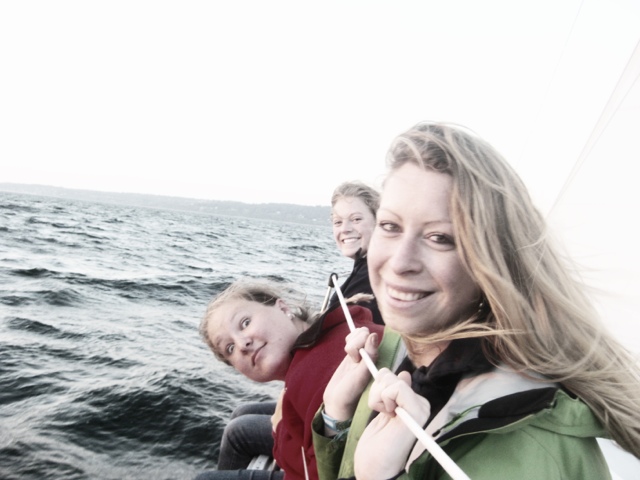 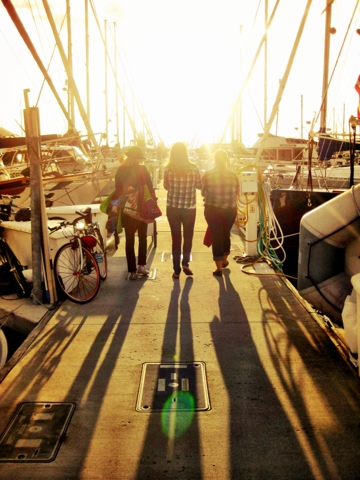 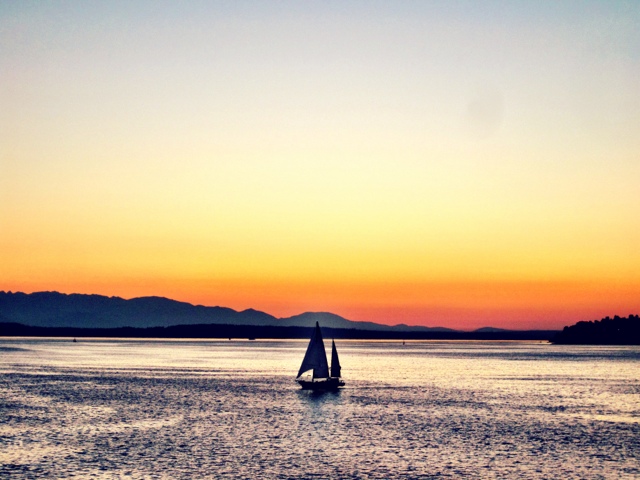 On the Saturday -my birthday- Sarah took me out to see the cirque de symphonies. Essentially a full classical orchestra played music on stage whilst incredible gymnasts and trapeze artists and contortionists and strong men did crazy routines that synced with the music perfectly. It was a beautiful performance.

In summary; I have fallen in love with Seattle. In fact, although I know they are completely different cities, I think I could quite possibly love it more than sweet home Chicago. And that’s saying something. The people are so chilled and friendly, and there is seemingly no massive violence or huge animosity between people. The water and phenomenal views surrounding the city reflect the serenity and calm of the people and indeed the way in which the city has been constructed around it.

Seeing Sarah was awesome. Having had Sarah live with our family for a year it was intriguing and educational to finally learn more about her family and her life. I guess the context in which Sarah lived and stayed with my family meant that after a while she became part of our family to the point where it was easy to forget Sarah has her very own wonderful family and life some 5000 miles away across an ocean. It is incredible the people you meet in life and the connections and long lasting friendships that can be maintained from the simplicity and innocence of an initial encounter where somehow you connect with each other on a deep and often subconscious level; and in turn that bond I don’t think can ever be broken. Our lives may be worlds apart but our minds and hearts exist on the same plain where we will forever be in each others thoughts. A year had passed since I had seen Sarah and yet, like a true friend or family member, it felt like it was all yesterday. Time is bizarre. The world is continuing to get smaller. I am blessed to have met and continue meeting people like Sarah in my life. And will miss her and Seattle and the everyday sisterhood immensely. Until next time miss brink…. 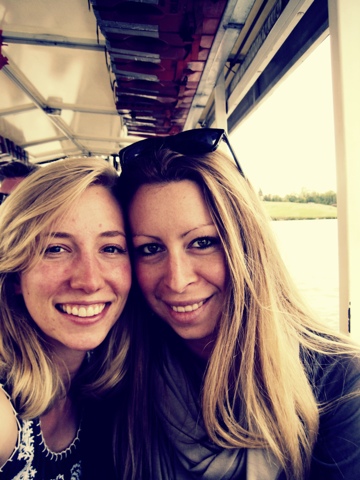