The above was actually said to me in one of the lectures I’ve been to over the last couple of days. And was more to do with the ocean environment and how we can look after it. But it did get me thinking about the decisions we make, and why we make them. What qualifies a good decision and what qualifies a bad one? I guess it’s a little bit like beauty… It’s in the eye of the beholder…

I met a guy called Francis (for the sake of anonymity) at the pilgrim pub in north Marston just before I left. I would say he was probably in his 40’s. I was simply popping in to drop off a refrigerator for my brother Chris who was working there at the time. But as Chris can usually do, he persuaded me to stay for a quick beverage, and so I sat at the bar waiting for him to finish up whatever he was doing so he could help me take the fridge out of the car.

Francis was by himself at the bar, and after introducing us to one another Chris disappeared off to do some jobs I would imagine. Our conversation started as pretty colloquial. Chat about the weather, chat about the pub and pubs in general. Then came in the question about what I am doing with my life, like ‘so what do you do Becky?”. This in itself is a pretty obscure question. I ‘do’ an awful lot of things. What specifically does this stranger want to know? Funny how a torrent of colloquial chit chat over the years has meant that actually, I know that this question is not an interest in trying to find out what i do in general, and that its actually asking what I do as a profession, as a career, as a job.

Just like most things with me I feel that sudden realisation that in order to explain to this perfect stranger that I have no job and that I am going travelling for a bit, I am going to have to give him rather a background story. Mainly to justify to myself (again) and not to him (necessarily) that there is a perfectly good reason as to why I am not employed, just bought a house, and leaving the country…

So it began. I am constantly in wonder at my ability to share with complete strangers elements of my life. So I started to explain about my last job, how it was nothing to do with my degree in theatre and dance, but was an incredible experience but after 2 and a half years of it I was at a point in my life where with no massive responsibilities (bar my house) and with no current ties to a relationship I felt that now was the time that I could go and do some things in life that I had always wanted to do. I explained about my desire to ultimately begin my own charity, how I wanted to get involved in various charitable experiences in order to better prepare me for that vision. I explained about my family, my brothers, my parents, living in the country, not living in London. It went on for a while. No surprises there. At the point where I got talking about my family, I did that thing I always do which is with great pride go through each member of my family and explain what they do and who they are as people. Francis did the usual mock gasp at the fact I was the only girl of 5 siblings. After analysing my brothers and parents and in general how great they are and how awesome my family is, he asked me a question no one had asked me before. ‘ so what do you think your family would say about you? How would they describe you?’ I told him that was a very interesting question. I paused and wondered what they do actually say about me. What does my personality project. I then came back to him with the response that they would all probably say something different based on experiences we have shared together over our childhood and adulthood so far. I explained that no matter what they said it would probably be true, so I wouldn’t mind.

I was far too concerned with the thought of what they thought about me that I didn’t really stop to think about the psychology of what Francis was asking me. He responded to me that what I said was false. He explained that whatever my brothers/family or even friends said about me was their truth. Not my own.  Again, I paused. Then I was like ‘touché’ that is true too. He went on to say that all that matters is my truth. That there are too many personalities, opinions, dynamics and contexts in play to really look into what other people’s truths are of myself as a character and that my own truth is all I need to know.

I wondered at this point how our conversation had become so deep. Then I remembered my own truth about who I am and smiled. I like these kinds of conversations. There the ones that stick with you for a while.

Anyway. Furthering on from this we started talking about decisions. My decisions to go abroad, to get into the charity sector, to work with people. He began to explain to me a little about his life story. I asked him what he did…. He explained he worked in IT. He had one child, a boy who was 12 years old, with his wife. He explained that they had waited 10 years to be able to have a child. Again, after this whole conversation I looked back and am in awe of the relative ease for even Francis to describe to me some of the most intimate struggles of his life.

He was mainly telling me this story from his life because he was trying to get the point across that we never know what is coming next. He didn’t know it would take that amount of time before they had a child when they got married. I didn’t know 6 years ago at the beginning of my last relationship that I would now be sitting half way across the Atlantic watching seminars on the ocean.

At this point I referred to the movie ‘sliding doors’. If you haven’t see it; I recommend. The films plot idea is a pretty decent conversation starting topic. In essence; a brief synopsis is that the main character (played by Gwyneth Paltrow) runs down to the London Underground to catch a train. The film shows one scene where she just makes it onto the tube, and then another scene where she bumps into someone on the way down the stairs and she literally just misses the train. The film then spins off into two stories about her life when she caught the train and her life where she didn’t. The one where she did get the train meant that she arrived home from work early to find her husband in bed with another woman; the one where she missed the train meant she still arrived at home but that woman had gone. Without ruining the film you can see how split decisions and random occurrences can alter each and every one of our own fates.

I am not entirely sure there is a massive point to this apparent essay. Only that because life throws a billion choices at us each and everyday, perhaps it’s time to start thinking a lot more about the decisions we make. What will become the new method for myself to make good qualified decisions on things in life where I have a direct handle in the outcome?

I certainly know that I could be better at making decisions, and that some of the decisions I have made of late are not even slightly justifiable to my own truth. But with no way of turning back the clock I have to submit myself to the fact that those decisions have moulded me into the character I am today; I have learned from those experiences to better my judgment the next time around.

To finish this little essay off…. A little while ago I posted the below on Facebook. I thought it was particularly funny and a pretty poignant look into my life at the time. Truth is it spins my life choices into something that they shouldn’t be reflected on as. It implies I have made bad decisions (which I guess I have) and that I am going to continue to, and that I am just content on bumming around the world and not making big big decisions about my life and settling down. I would say now that how i feel is the complete opposite. The settling down, marriage and kids etc will all come in good time. I am content with the position I am in, where I am going and am consciously going to be making better decisions from is point onwards. 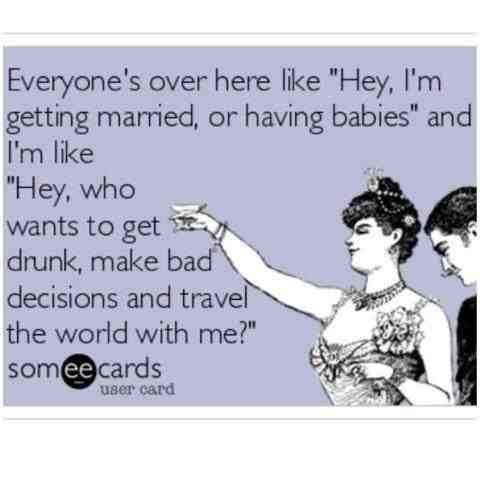