So with my little essay regarding decision making I neglected to tell you about my day at sea yesterday (Wednesday)….

Woke up and watched a movie called the marriage vow. Or something like that. It starred robin Williams and Mandy Moore. Of all the weird combinations. Pretty funny rom com where robin Williams plays the priest that puts a couple through the marriage counselling/training before they get married. Worth a watch if ever you need a giggle or two about marriage and the trivialities within relationships that often seem to often take over.

Anyway, after this. Found the ship library. I love books and libraries. My ideal home could literally just consist of the library from the Disney movie beauty and the beast, and that’s it. I would be extremely satisfied. The library is just below the bridge and has stunning views at the front of the ship. So I sat down at the front of the ship, plugged in my iPod and did about 10 Sudoku puzzles. At one point a school of dolphins were by the window, that was pretty cool.

Mum went off to a lecture, but I was pretty content just listening to music and brain training. The i-pod at one point did decide to randomly play the titanic movie theme song (not the Celine Dion version, the instrumental James Horner soundtrack version) that was bizarre. But it did inspire me to go for a wonder outside on deck and get as close to the front of the ship as I possibly could. Leo and Kate style. 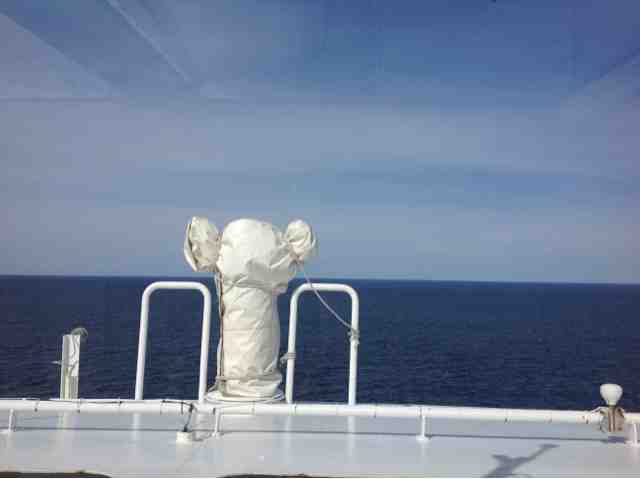 The above image is from ‘the lookout’ a place at the front top if the ship that I only found recently, but now find myself going there quite a bit.

Met up with Florence my French friend at 3pm to go for a swim. That was magnificent. Nothing quite like being in water, on water. The water in the pool mirrors the action of the sea. As yet we haven’t experienced anything remotely choppy and i do have to remind myself from time to time that I am on a ship and not just a huge hotel somewhere on land.

At dinner time we have a early sitting every night, eating at 6pm. We sit just the two of us and have a dedicated waiter called Louis from the Philippines looking after us. He is literally the sweetest man.

After dinner we went to see the movie Argo. Was a very well done film and I can see why it won so many awards. Pretty petrifying plot situations, and really makes you think outside your own little comfort bubble and contemplate on other countries in the world and the mass hardships other human beings go through on a daily basis. We really are very fortunate. The film is one of the most intense films I’ve ever seen. So mum and I both agreed a seriously alcoholic beverage was needed afterwards. We disappeared off down to the nightclub and had a boogie and some drinks. Saw Florence again. Really lovely girl from Paris. Travelling with her grandmother to New York for the first time. Hope we will stay in touch.

Mum retired to bed and I found some more people to talk to. 3 Germans and an American woman. The two German girls were extremely glamorous. I sat talking to the all for a while. The german man was very worldly.The older American lady is from Florida. She is the kind of woman I’ve only ever seen in movies. Eccentric, travelling alone since 2 months ago when she made another transatlantic crossing from Florida to Spain. Then she did another cruise in the Mediterranean, some of Europe by road and now obviously is on her way home. She picked up my name pretty quickly and started introducing me to all sorts of other people. She, with a cigarette in hand, and a glass of wine in the other, would be like “becky darling, this is Suzanne, she is from Germany, traveling with her mother, she has fabulous blonde hair don’t you think….” Etc etc. (imagine her saying this is a southern style but posh, rasping slightly deeper american accent) she is quite frankly awesome.

You may think what she’s been doing as a very long time at sea. However I would say on here it really isn’t that strange. I found out that there is one lady on here that has been cruising for 3 years all over the world. Hasn’t been on land for over a week in more than three years. That’s mental! It really is a way of life, and I would say that a pretty large proportion of people I’ve met on here (generally older) are on their way back to the states after cruising over to Europe a few months ago.

Cruising is weird. I’m not going to sugar coat it. The whole thing is like marmite. You either love it or hate it. I don’t think there is an in between. For me I am enjoying the time out and the head space. There is really nothing you can do apart from relax. The world is such a small place now, I could be the other side of the world in less than 24 hours if I wanted to. But it’s just nice to get a bit of perspective. After all, before planes this was how people travelled. 25 days across the Atlantic in a ship was considered fast only just over 120 years ago. The evolution of travel has, for me, diluted the relative pleasure it can be to really feel like you ‘travelled’ from A to B. There is some kind of sense that I deserve to be at the destination more because it took time to get there. Like serious time. 7 days on a ship is a concept that many of my peers find hilarious though.

Some of the people on this ship have worked and practically lived on board since its maiden voyage in 2004. Their lives literally revolve around this ship. They meet people on here, wives, husbands, best friends etc. Our waiter Louis next gets to go home for a few weeks in November this year, and last time he was home was 9 months ago. Effectively this ship is his home!! The expression cabin fever doesn’t really seem to cut it. Everyone on here that works on here are smiley and pleasant and established in their way of life. But for me, in the nicest way possible, they all seem a bit nuts. I guess you become your occupation and what you are around, and that is no different here. I bet they have some pretty great stories to tell. Above is our corridor. You can’t even see the end.  This boat is huge! Good night 🙂